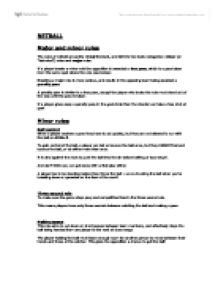 NETBALL Major and minor rules The rules of netball are pretty straightforward, and fall into two basic categories: minor (or "technical") rules and major rules. If a player breaks a minor rule the opposition is awarded a free pass, which is a pass taken from the same spot where the rule was broken. Breaking a major rule is more serious, and results in the opposing team being awarded a penalty pass. A penalty pass is similar to a free pass, except the player who broke the rule must stand out of the way until the pass is taken. If a player gives away a penalty pass in the goal circle then the shooter can take a free shot at goal. Minor rules Ball control When a player receives a pass they have to act quickly, but they are not allowed to run with the ball or dribble it. To gain control of the ball, a player can bat or bounce the ball once, but they CANNOT bat and bounce the ball, or do either more than once. ...read more.

A good thing about this rule is that it stops taller and bigger players using their size to unfair advantage. Defenders have to stand 0.9m (3ft) away from the player with the ball. From this distance a player can try and win the ball back, but ONLY when it has been thrown into the air. Players can defend a member of the other team who does not have the ball but they cannot touch them or s****h the ball from under their nose! If a player makes physical contact and disrupts play then a penalty pass is awarded. But remember to be careful, because even if you trip over your shoelaces and knock another player over by accident - the referee will still give a penalty pass! Moving the goalposts No-one would notice if you just moved that 3m (10ft) goalpost just a little nearer would they? Well, if a player is caught leaning on a post then a free pass will be given. But if you try and move the thing then you will give the other side a penalty pass. So moving the goalposts is definitely not allowed! ...read more.