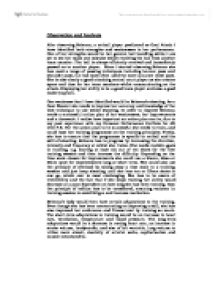 Observation and Analysis of a Netball game.

Observation and Analysis After observing Rebecca, a netball player positioned as Goal Attack I have identified both strengths and weaknesses in her performance. One of her strengths would be her general ball handling skills; I am yet to see her make one mistake whilst receiving the ball from another team member. The ball is always efficiently received and immediately passed on to another player. Since I started observing Rebecca she has used a range of passing techniques including bounce pass and shoulder pass, but has most often used the more accurate chest pass. She is also clearly a good attacking central court player as she creates space and time for her team members whilst communicating on the attack. Displaying her ability to be a good team player and also a good leader/captain. One weakness that I have identified would be Rebecca's shooting. As a Goal Shooter she needs to improve her accuracy and knowledge of the best technique to use whilst shooting. In order to improve Rebecca needs a successful action plan of her weaknesses, her improvements and a timescale. I realise how important an action plan can be, due to my past experience with my Personal Performance Portfolio for AS level P.E. For the action plan to be successful she needs to train, and could base her training programme on the training principles. Firstly, she has to ensure that the programme is specific to netball and the skill of shooting. ...read more.

She must realise that to be balanced the centre of gravity, her weight needs to be balanced in all directions. As Newton states in his second law of motion - acceleration, the ball will move if it is directly proportional to the force causing it and inversely proportional to the mass of the object. So Rebecca must realise how heavy the ball is and just how much force she needs to apply for it to move into the net. She knows this as she has probably been taught how to throw a ball from a young age; therefore it is a fundamental motor skill. As an A level student with her first sport being netball, I would suggest that Rebecca is in either the Associate or Autonomous stage of learning. But from watching her play today she has looks to be in the autonomous stage of learning for netball, but the cognitive stage of shooting. This could be because of the importance of the day so she is making unnecessary mistakes because of nervousness. Another aspect that is playing large part of her performance would be Rebecca's motivation level. Her motivation levels for today will be high as well as her arousal levels as today is so important. But as Yerkes and Dodson states the higher your arousal level the higher your performance level will be, but only to a certain point - optimum arousal level. ...read more.

Women in sport in general, specifically netball don't have many role models to look up to and admire as women have always been second to men in most sports. Specifically in this area women's opportunities, provision and esteem suffer due to the traditional emphasis of a male rugby dominated welsh culture. Rebecca hasn't been given the same amount of opportunities as many other sports people and this has had a negative effect. For Rebecca to be in a local team she has to travel to the training sessions and matches which can be up to fifteen minutes from her home. Even on a national scale women are under represented in sport, with only 5% of the space in national newspapers for sport covering women's sport. Lack of funding is also an issue, which would have been detrimental to Rebecca's performance. There is a lack of facilities in the area therefore a lack of general interest for trials and tournaments. South Wales Schools, unfortunately for Rebecca, concentrate more on rugby for boys as opposed to netball for girls; this needs to improve on a national scale for Rebecca to see any benefits in her performance. But unfortunately for Rebecca and other local sports women this has always been the case. Traditionally emphasis in sport was always on public school boys. The only main sport girls used to play was tennis, never netball in the nineteenth century girl's schools. So women's sport started steps behind men and will remain steps behind, making girls in school today, like Rebecca feel inferia to her male sporting counterparts. ...read more.