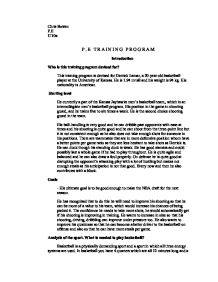 Chris Bowen P.E IT10a P.E TRAINING PROGRAM Introduction Who is this training program devised for? This training program is devised for Derrick Lamar, a 20-year old basketball player at the University of Kansas. He is 1.94 m tall and his weight is 94 kg. His nationality is American. Starting level He currently a part of the Kansas Jayhawks men's basketball team., which is an intercollegiate men's basketball program. His position in the game in shooting guard, and he trains five to six times a week. He is the second choice shooting guard in the team. His ball-handling is very good and he can dribble past opponents with ease at times and his shooting is quite good and he can shoot from the three-point line but it is not consistent enough as he also does not take enough shots for someone in his positions. There are teammates that are in more defensive position whom have a better points per game ratio as they are less hesitant to take shots as Derrick is. He can dunk though his standing dunk is weak. He has good stamina and could possibly last a whole game if he had to play throughout. He is quite agile and balanced and he can also draw a foul properly. On defense he is quite good at disrupting the opponent's attacking play with a lot of hustling but makes not enough steals as his anticipation is not that good. ...read more.

Then Derrick can practice dunking before practice the previous shots but shooting them off the dribble. He show slowly start cooling down by practicing taking these shots in random order. Cooling down should should then occur with another session of stretching. He should then continue with strength II training exercises. There are obviously a lot listed so he could do half of the exercises listed on Tuesday and the other half on the other day he is listed to do strength II training (Saturday) so he could do squats, leg curls, calf raises, abs, leg presses and wall sits. He should do 1 or 2 sets and around 10 reps of each of these exercises. In between each exercise, he should have a 60 to 90 second rest to recover. In total he should spend around 45 - 60 minutes doing thins training and each of the reps should be done at a high intensity but properly. To cool down, he should do some running on the treadmill. Derrick should then finally do conditioning training. I would consider this to be the most physically demanding part of his training schedule. This session I would expect Derrick to do suicides, backpedal drills, wall drills and jumping drills. All of the drills are to be done with full intensity for a minute and in 5 reps. Derrick should rest for 60 to 90 seconds between each rep, before starting another one. To complete the whole training I'd expect 40 - 50 minutes to be necessary. ...read more.