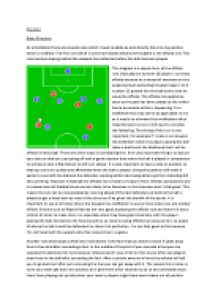 ﻿P.E 2.4.2 Rules Structure As a footballer there are several rules which I need to abide by and directly link into my position which is midfield. The first rule which is one that heavily influences the game is the offside rule. This rule involves staying behind the deepest line defender before the ball has been played. This diagram is a simple form of the offside rule. Basically the number 10 player is currently offside because he is ahead of everyone on the opposing team excluding the goal keeper. So if number 11 passed him the ball at this time he would be offside. The offside rule applies as soon as the pass has been played so the striker has to be onside as this is happening. To a midfielder this may not be as applicable to me as it would to a forward but midfielders often make forward runs so I still need to consider the following. The timing of the run is very important, for example if I make a run beyond the defenders when the player passing the ball takes a bad touch the likelihood that I will be offside is fairly high. There are a few ways of combatting this. One very important thing is to stay on your toes so that you can spring off with a good reaction time when the ball is played in comparison to someone who is flat-footed so will turn slower. It is also important to have a side on position so that you can turn quickly and effectively when the ball is played. Using this position will make it easier to see both the ball and the defender marking whilst also being able to go from standing still into sprinting. However in football the offside rule is hard to measure from referees perspective and in a lower level of football there are less likely to be linesman or the linesman aren?t that great. ...read more.

However this formation for me is not always the best formation because it requires a lot of technical ability in the midfielder which I don?t think we quite have as well as a certain cleverness with the movement. This leads to play often breaking down in midfield as people try to over complicate things instead of playing simple passes. I don?t think we are good enough as a team to play this formation. The other formation that we use is the 4-4-1-1 formation. I think that this formation is a more simple way of playing to the 4-4-2 diamond formation and is one which is more direct because it requires less rotation within the midfield. Using this formation the midfield is more rigid however it doesn?t necessarily mean that there can be no rotation. For example sometimes the right or left midfielder may move inside which would be the trigger for either the centre midfielder o take this place up or the full back. Usually the full back would take up this position making it more compact in the midfield. Personally I feel that this formation is easier to defend with because of its more basic shape, especially if we are playing against someone with a basic formation. When defending with this formation the second striker is require to step back into the midfield four making it five. This is what sets apart this formation and the 4-4-2 formation. Because the second striker has more defensive responsibilities it means that player has more of a free role position so can venture anywhere in attacking positions. This is why I feel this formation is a better formation. Although there may not be as much of a direct threat attacking it helps overload the midfield as the second striker comes in to get the ball. This gives the other team a lot of problems because sometimes the central defender doesn?t know whether to follow that player or whether to tell one of the midfielders to mark him. ...read more.

I know when to use the right techniques for the right situations I just don?t execute it that well. For example if you are one on one with the keeper the best thing to do is try to place it either side of the keeper is this is more accurate. The problem is definitely the accuracy as I have no problem with getting enough power on the shot. When tackling I think my weakest area of this technique is knowing when to tackle and when not to. My sliding tackle is quite good as usually I go into a challenge with the intention to win the ball and most of the time I do. However sometimes I may close down a player and move in to tackle too early and they might just take it round me. I think sometimes I may be too eager to win the ball rather than being patient and waiting for the right opportunity to do so. Vincent Kompany is a great elite example of a player who knows exactly when to put a tackle in as a mistake for him will cost his team a goal which he rarely concedes. Most things with my weak foot aren?t great but my weak foot passing is quite a big area for improvement. Partly the reason for this is that I had quite a bad injury which affected my technique a little by the way I kick the ball. However it is still something that can be improved. My weakest part of passing is definitely the drilled pass. I find it difficult to execute a drilled pass effectively with enough accuracy whilst doing it with my weak foot, especially in comparison to my stronger foot which I am very comfortable in doing. Because of this it may mean that in a game I may have to use my stronger foot when it is easier to use my weaker foot in order to pass the ball. ...read more.