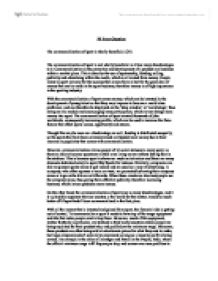 PE Exam Question: The commercialisation of sport is wholly beneficial. (25)

PE Exam Question The commercialisation of sport is wholly beneficial. (25) The commercialisation of sport is not wholly beneficial as it has many disadvantages to it. Commercialisation is the promotion and development of a product as a business within a market place. This is done by the use of sponsorship, funding, selling, publicity and advertising within the media, which is all rooted from money. People invest in sport not only for the success that comes from it, but for the great deal of money that can be made in the sport business, therefore money is of high importance in the sporting industry. With the commercialisation of sport comes money, which can be invested in the development of young talent so that they may improve to become a world class performer, and can therefore be displayed on the 'shop window' or 'world stage,' thus acting as role models and encouraging mass participation, which in turn brings more money into sport. ...read more.

When these events are televised people see the company name, thus giving them effective publicity, therefore increasing business, which in turn produces more money. On the other hand, the commercialisation of sport also as many disadvantages, and it is a plausible argument that our country, o the world for that matter, would be much better off if sport hadn't been commercialised in the first place. With all the money that is invested and gained from sport, the financial side is getting out of control. To commercialise a sport it needs to have top of the range equipment and kits that make people want to buy them. However, much of this equipment, leather footballs in particular, are stitched in third world countries where people ate being exploited for their productivity, and paid below the minimum wage. Moreover, these products are often being sold at extortionate prices for what they cost to make, but large companies don't seem to be concerned as long as a massive profit is being earned. ...read more.

Greg Rusedski, for example, tested positive for nandrolone, an anabolic androgenic steroid that increases strength, despite claims of his innocence. Footballers are paid a great deal of money and therefore can afford to drink alcohol excessively, use drugs and live playboy lifestyles. Two good examples are Adrian Mutu, who was given a six-month ban after he tested positive for cocaine, and Tony Adams overcame his alcohol addiction and has set up a clinic for alcoholics. Sportsmen and women are often exposed and splashed across the media, of which tabloids are the most common. Advertising is an important part of the commercialisation of sport, however, this is not always fair. Larger companies are able to spend more money on promotion and publicity, whereas smaller companies are less able to do so, creating unfair competition. Another negative aspect to emerge from the commercialisation of sport is hooliganism. Using football as an example, there has been a massive increase of hooliganism where competing teams or countries fight over superiority, and in many cases people have been injured and even killed. ...read more.