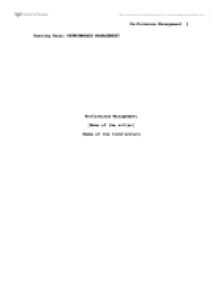 Performance appraisals are of importance to the organisation, as they often provide the only measure of an individual's contribution and as such the means for identifying either over or under achievement

Running Head: PERFORMANCE MANAGEMENT Performance Management [Name of the writer] [Name of the institution] Performance Management The basis of the mainstream of performance appraisals within the modern workplace is one person (a manager or executive) rating one more, an intrinsically individual process. There are distinction such as 360 degree appraisals that include the judgment of others such as clientele and peers/colleagues in the process but it is the action of one person transitory judgment upon another that is subjective in nature and the root cause of many of the problems encountered in the research associated with performance appraisals. Performance appraisals are of importance to the organisation, as they often provide the only measure of an individual's contribution and as such the means for identifying either over or under achievement. This information identifies strengths and weaknesses among employees, locating areas for necessary training and development and helps employers implement appropriate reward policies designed to improve the performance of the employees and (as a consequence) the employer (Burns 1996, p.166). They are often also the only means of evaluating the degree of success associated with the various aspects of the recruitment and selection process. "The most fundamental and most difficult problem in any selection research program is to obtain satisfactory criterion for measures of performance on the job against which to validate selection procedures" (Thorndike 2000, p. ...read more.

Broad distinctions have been made between measures of task proficiency in job performance and what is being called 'contextual performance' (Arvey Murphy 1998). Borman Motowidlo (2003) define task performance as the proficiency with which incumbents perform core technical activities that are important for there jobs and contextual performance as extratask proficiency that contributes more to the organisational, social, and psychological environment to help accomplish organisational objectives. Contextual factors include such aspects as persisting with enthusiasm and extra effort, volunteering to carry out duties not formally part of ones job, and endorsing and supporting organisational objectives. Once what construes 'job performance' has been adequately defined, measurement of said performance needs to occur. Human judgement is subject to many errors and supervisors are often forced to make some subjective judgements. There are a wide range of problems associated with these judgements. Subjectivity opens the door to favouritism, where evaluators act on personal preferences to favour some employees over others and use their power to reward preferred subordinates beyond their true value. Prendergast Topel (1996) found that degree of favouritism was dependent on the incentives offered to the worker, with a stronger correlation between incentive pay and the supervisors' report decreasing reporting accuracy. The effects of favouritism are a deemphasising of incentive pay and bureaucratic rules in pay and promotion decisions where little weight is put on supervisor appraisals and other subjective opinions of performance and excess weight placed on noncorruptible measures such as seniority. ...read more.

Weighting of the objectives then occurs by assigning a relative importance to each of the job elements. Various distinct and measurable levels of performance associated with each job objective are established. When the time for evaluation comes around the employee conducts a self-evaluation prior to the evaluation meeting and the discrepancies form the basis of discussion at the meeting. Research into the relative fairness of performance appraisals and rating systems using concepts of due process and procedural justice, (Folger 2002) has resulted in the development of three characteristics of a due-process appraisal system. These incorporate giving 'adequate notice,' employing organisations should publish, distribute, and explain performance evaluation standards and processes, a 'fair hearing,' a formal review meeting in which an employee is informed of his/her evaluation and 'judgement based on evidence,' raters should apply performance standards consistently across employees, without distortion by external pressures, corruption or personal biases. Despite most performance appraisals being subjective there is increasing optimism regarding the use of supervisory ratings and other 'subjective' appraisal instruments and formats and it is generally recognised that such systems do not automatically translate into rater error or bias and often provide cost effective solutions to the measurement of performance. In light of studies suggesting the relative validity of subjective measures of performance perhaps the one area that organisations could act to improve is the training of managers and supervisors in how to effectively conduct such appraisals (Hubbart 1995). ...read more.