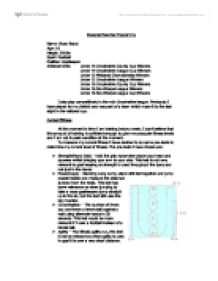 I have chosen these tests, as they will find out the aspects of the sport that I am needing to improve. Fitness Component Score Rating (Compared to N.A.) Strength 57 Good Power 183 Poor Co-ordination 28 Average Agility 18.3 Poor Sit-ups 44 Good Push-Ups 55 Good These test results show the areas, which I need to improve on, are my power agility and co-ordination. To overcome this I will base more of my fitness programme on improving these aspects but still include some exercises, which will keep the other aspects reasonably high. The main aim of my P.E.P. is to try and improve the main aspects of goalkeeping. These are the following areas that I aim to work on: Co-ordination - The interaction of motor and nervous systems to produce smooth accurate movements. Hand-Eye co-ordination is needed for goalkeepers in order to save and to catch the ball. Co-ordination also helps with goal kicks as you connect properly with the ball and get a clean strike rather than mis-kicking the ball or kicking the ground. ...read more.

The higher a players muscular power the higher he will be able to take claim the cross meaning the attacker will less chance of getting the ball and scoring. It will also mean that a goalkeeper will be able to dive further into bottom corners meaning they will save some shots they weren't able to reach and hold onto some shots they would only parry. Other Areas Of Goalkeeping Reaction Time - is the ability to react to a stimulus. Factors that effect response are, the number of stimuli and the number reactions that each stimuli has. Reaction time is used in goalkeeping when a player shoots or a cross is made, the quicker a reaction time the more movement time there is for that goalkeeper to get across and make the save. Flexibility - is the ability to move a joint through its full range of movements. Flexibility is used in goalkeeping when making a save low down, as the more flexible you the further you will be able to reach meaning saving a shot which you wouldn't have and catching shots you would only parry therefore reducing amount of goal-scoring opportunities. Flexibility also reduces the chances of injury. ...read more.