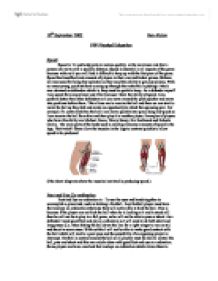 18th September 2003 Ben Alston PPP Physical Education Speed Speed is: To put body parts in motion quickly, or the maximum rate that a person can move over a specific distance. Speed is essential in all aspects of the game because with out it you will find it difficult to keep up with the fast pace of the game. Speed has benefited vast amounts of players in their own individual games. Strikers are renowned for being fast sprinters as they need this ability to get past players. With so many young, quick strikers coming up through the ranks this is putting a whole new demand on defenders which is, they must be quick to keep. As a defender myself I can speak from experience and I feel because I have the ability of speed, I can perform better than other defenders as I can move around the pitch quicker and move into positions before them. This allows me to receive the ball and then we can start to move the ball up the pitch and create an opportunity to attack the opposing goal. ...read more.

As a defender I need good foot and eye co-ordination as I will need to do both short and long passes (i.e. when hitting the ball down the line for a right winger to run on to) and shoot in some cases. With out this I will not be able to make good contact with the ball which will lead to a poor pass and the possibility of an opposing player to intercept. Football is centred around the ball so all players must be able to control the ball, pass and shoot and this can only be done with good foot and eye co-ordination. Some players are have excellent foot and eye co-ordination which allows them to make clean and good contact with the ball enabling them to hit longer and more accurate passes. One of these exceptional players is David Beckham. Stamina Stamina is: To exert maximum effort over a period of time. Your stamina is measured on how long you can perform for at any one time. ...read more.

Stamina an be improved by continuous cardiovascular exercise which will increase a persons level of stamina thus allowing the person to perform longer in a giver sport. This form of exercise develops the heart muscle and makes it bigger and stronger. Agility Agility is: To move and change direction and position of the body quickly and effectively while under control. Every player has agility just some have it more than others. In a game a wide variety of players demonstrate good agility whether it be a striker weaving in and out of defenders to try and create an opportunity t shoot at goal or it may be a midfielder weaving in and out of opposing midfielders and creating opportunity's to attack the opposing goal. As I am a defender I need a lot of agility as I as I need to be able to move my body and change my body position quickly when tracking back to cover a centre forward who is using his agility to try and dribble the ball past me. In England we have some excellent footballers who are full of agility such as Joe Cole, Steven Gerrard, David Beckham and Trevor Sinclair. ...read more.