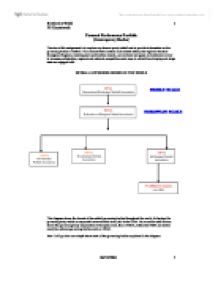 Personal Performance Portfolio (Contemporary Studies) The aim of this assignment is to explore my chosen sport; netball and to provide information on the governing bodies of netball. This includes their location and contact details, the regional structure throughout England, coaching and qualification awards, promotional and grass root schemes on how to increase participation, regional and national competitions and ways in which blood doping and drugs tests are engaged with. NETBALL GOVERNING BODIES IN THE WORLD This diagram shows the format of the netball governing bodies throughout the world, it displays the governing body which is responsible at worldwide level, this is the IFNA. On a smaller scale it then shows the governing body responsible at European level, this is FENA, within the FENA are all the countries national governing bodies such as AENA. Now I will go into more depth about each of the governing bodies explained in the diagram. IFNA is the sole governing Body of netball internationally and is responsible for coordinating Netball on a global scale. Its contact details are as following below: International Federation of Netball Association Birmingham Sports Centre Highgate Birmingham England B12 9DL Email: [email protected] Tel: 0121 446 451 Fax: 0121 446 857 www.netball.org It has many duties and responsibilities, its mission statement claims to be, "... dedicated to promote and develop Netball as a desired sport in all countries of the world and to raise awareness and appreciation of the game." Also to: * foster, encourage, support and develop the game of netball * to control and conduct international competition This includes organising the Netball World Championships. It is open to national netball associations and has 38 affiliated members grouped into 5 regions- Africa, Asia, Americas, Europe and Oceania. These include: Antigua and Barbuda Australia Barbados Bermuda Botswana Canada Cayman Islands Cook Islands England Fiji Gibraltar Grenada Hong Kong India Jamaica Lesotho Malawi Malaysia Malta New Zealand Niue Northern Ireland Pakistan Papua New Guinea Republic of Ireland Republic of Maldives Samoa Scotland Singapore South Africa Sri Lanka St Kitts-Nevis St Lucia St. ...read more.

The prizes involved are extrinsic as they involve money for 1st, 2nd and 3rd place. The competition takes place during May and June. INTERNATIONAL EVENTS THE WORLD NETBALL CHAMPIONSHIP & WORLD YOUTH CHAMPIONSHIP This takes place every four years at different places throughout the world; however this is agreed 8 years beforehand through representatives from 20 or more of the total 50 countries playing in the competition. The last World Championships was held in 2003 in Jamaica and the next World Youth Championship will be held in 2005 in the United States of America. COMMONWEALTH GAMES The foundations of netball in the commonwealth games began in 1998 in Kuala Lumpur, the results stood as: The 2002 Commonwealth Games was held in Manchester at the MEN Arena with ten teams competing in the games. The ten teams were divided into two pools of five teams. The next commonwealth games will be held in Melbourne, Australia in 2006. INTERNATIONAL TEST SERIES The Test International Series takes place annually in England; however the invitation to take part is always extended to one of the top world Netball countries. For example in 2001 and 2002 Australia took part, South Africa in 1994 and 2000, Cook Islands in 1995, Jamaica in 1996 and 2000, New Zealand in 1997 and West Indies in 1998. The major venues used for these competitions include: * Wembley * NIA Birmingham * Gateshead Arena * MEN Arena * Manchester * Sheffield Arena Each of which a populated audience is expected, as well as other media coverage including BBC Grandstand and Sky TV. England is not the only country to hold test series other countries throughout the world do and likewise England has been invited to them, such occasions are shown below: Australia- 2000 New Zealand- 2001 Caribbean- 2000 The England squad had also set up training camps in other countries so that the team can compete in other foreign matches, but also train and have practise matches abroad. ...read more.

Therefore these types of stimulants are banned substances under Class 1 of the IOC (International Olympic Committee) rules. Some examples of unusual banned substances include: * Day Nurse * Sudafed * Ginseng * Caffeine If there are any queries into the substances allowed then teams can contact: Sports Council Anti Doping Directorate- 020 7380 8033 SO WHAT IS SAFE?????? All antibiotics, all oral contraceptives, all preparations for the skin are all legal and safe to use. PAINRELIEF- Aspirin, Paracetamol, Codine, Dihydrocodeine, Dextropoxyphene, all non-steroidal anti inflammatory drugs such as Ibuprofen and Voltarol. This includes preparations for migraine such as Migraleve. COLDS AND COUGHS- Most antihistamines, pholcodeine, guiaphenesin, dextromethorphan. HAYFEVER- most antihistamines, Haymine is banned it contains ephedrine Nasal sprays such as Beconase Eye drops such as sodium cromglycate ASTHMA- many athletes suffer from asthma and need continuous treatment, if so the medical officer of the AENA should be notified. Legal inhaled substances include: sodium, cromoglycate, theophylline, salbutamol, terbutaline, salmeterol, beclomethasone, fluticason. Banned substances include: phenylpropanolmine, epgerdrine, pseudoephdrine, phenylephrine. Examples: Sudafed, lemsip, benyline day, contac 400. When researching information on blood doping in netball there were no known issues however with an increase in the sport in many European and worldwide countries it is a possibility that this may occur. Other sport's where this has occurred is in cycling, skiing, dog racing and swimming. Finance Much of the finance received is through Sport England or other organised governing providers which are superior to the individual sporting governing bodies. However clubs finance is received through sponsorship, this can be a private sponsored or a national sponsor such as 'mitre'. It is also collected off players as match fees and training fees. AENA will receive money of specific amounts for projects such as a netball courts or a training program or possible tournament from the FENA however these donations will be in good mind stead as they will be such that that England would be holding the European netball cup or likewise. 1 Kimberley Webb PE Coursework 1 06/12/2004 ...read more.