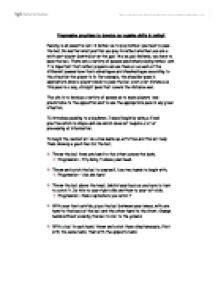 Progressive practises to develop my passing skills in netball

Progressive practises to develop my passing skills in netball Passing is an essential skill in netball as to play netball you need to pass the ball. No matter what position you play in netball whether you are a mid-court player (centre) or on the goal line as goal defence, you have to pass the ball. There are a variety of passes used when playing netball and it is important that netball players can use them all as each of the different passes have their advantages and disadvantages according to the situation the player is in. For example, the shoulder pass is appropriate when a player needs to pass the ball over a far distance as this pass is a long, straight pass that covers the distance well. The aim is to develop a variety of passes as to make players less predictable to the opposition and to use the appropriate pass in any given situation. To introduce passing to a beginner, I would begin by using a fixed practise which is simple and one which does not require a lot of processing of information. To begin the learner will do a few warm up activities and this will help them develop a good feel for the ball. ...read more.

This practise should be carried out correctly such that when you release the ball you follow through and that you release the ball quickly propelling the ball with your arms and wrists. Draw 5 targets at various heights on a wall with chalk. Take 3 steps from the wall to begin your practise. Using a shoulder pass, see how many throws it takes to hit every hand in order once. Now use the two handed chest pas and repeat the exercise. Mark chalk lines on the ground at varying distances from the wall. Try to hit one target with one pass from each line. Then try and hit all targets from each line. Use targets on the ground for high ball practise. Mark 3-4 large crosses on the ground. Release the ball high above the head and see if it can land on the targeted cross. Use both the one hand and two handed passes when practising. To progress this practise change hands and try passing with the other hand. Increase the number of steps you take from the wall. Repeat the drills from the reverse position. Start the practise with your back to the wall. Throw the ball into the air above your head. Jump to catch it and turn to face the wall as you land. ...read more.