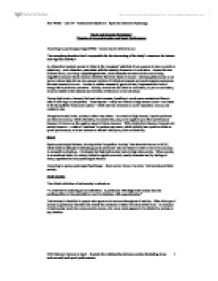 Sport and Exercise Psychology Theories of Arousal/Anxiety and Sport Performance According to psychologist, Sage (1984) - arousal can be defined as an:- "An energizing function that is responsible for the harnessing of the body's resources for intense and vigorous activity" In a theoretical context, arousal is linked to the 'energised' state that drives a person to learn or perform effectively - and is therefore, associated with the intensity dimension of motivation. Arousal has two different forms, one being a physiological state, called Somatic arousal and the second being Cognitive arousal. Much evidence identifies these two states of arousal - clarifying that arousal is not just an internal state but can be a general mixture of both physiological and psychological experiences that each amount in to one. Arousal is neither necessarily good nor bad; it represents the level of energy that a performer possesses. Initially, arousal can be linked to motivation, as just as motivation, it can be related to the intensity and direction of behaviour of an individual. During high levels of arousal, the heart rate increases, breathing is much more constant and there is often a mere sign of perspiration. These aspects - which are a result of high arousal levels - are linked to the Sympathetic Autonomic system - which also has influence on one's respiratory volume, and metabolic rate. Alongside arousal levels, anxiety is often a key factor. As a result of high arousal, a sports performer can become anxious, which ultimately, if uncontrolled, can prove negative upon their performance because it is known as the negative aspect of stress response With a distinctive balance of arousal and anxiety however - a state of 'readiness' to perform can occur, which initially has a positive effect on sports performance, as it can enhance an athlete's ability to perform effectively. SCAT Sports psychologist Martens, developed the Competition Anxiety Test otherwise known as SCAT, which made an attempt at identifying sports performers who are likely to suffer or strive from anxiety in competitive situations. ...read more.

These factors include: Personality: Where extroverts are likely to perform most effectively - during periods of high arousal. Whereas, Introverts are likely to perform at their best, during conditions of low arousal. Often extroverts benefit from stress and their selective attention increases, to a point at which it benefits their performance. Too much stress and arousal can lead an introvert out of their 'zone' causing their performance, evidenced by the Inverted U, to decrease somewhat. Type of task: Simple, easy types of activity, such as discus and shot putt, tend to be gross, habitual and consistent. Due to such characteristics, there is a wide margin for error in the sport. During conditions of high arousal, sports such as those mentioned above, are performed much more effectively. Smaller, less simple, complex tasks - are performed (as mentioned above) during conditions of low arousal. For example: Spin bowling in Cricket. Stage of learning: An elite athlete - who is at their autonomous stage of learning, would notice that high arousal is going to beneficial to their performance because they possess the ability to control both their arousal levels and their competitive anxiety, to a point at which they can ensure they remain in their ZOF. Those performers of who are at the cognitive or associative stages of their learning have a greater need to concentrate and control their anxiety, so it does not negatively effect their performance. Because of this greater need to concentrate, they would learn and perform much better, when calm and in control of their emotions. Experience: Highly experienced performer - who are often the elite players, at their autonomous stage of learning - are likely to find that their performance is of a much greater standard when their arousal levels are high, as apposed to vice versa. The novice player, less experienced, quite often those at their associative stage of learning - are more likely to find that their performance is much more efficient and of a better standard, when there are conditions of low arousal. ...read more.

- and the main aim is for eventually, the athlete will take as little time as possible to become fully relaxed - so later, once completely trained, they can apply this to their sport. This method releases tension and emphasises slow, easy breathing - encouraging visualisation of stress leaving the body and a sense of tranquillity and calmness. PROGRESSIVE RELAXATION TRAINING Progressive relaxation training is a longitudinal method of relaxation. This effective form of stress management is a technique concerned with learning to be aware of and to "feel" the tension in the muscles and then to disperse of this tension by "letting go" of it. Sports psychologist Jacobsen devised this method to gain a result of which where the every muscle group in the body can relax themselves at one time. Many top sports performers use progressive relaxation to psyche them up and to release any tension from their body, especially prior to competition - where levels of anxiety and stress are often at their highest. BIOFEEDBACK The "Biofeedback" process involves any sports performer or athlete receiving physiological feedback immediately. For example, an ongoing reading from an electrocardiograph can help an anxious athlete in the process of controlling their heart rate, pulse rate and feelings of stress and anxiety. There are other methods to reduce anxiety and control stress levels in sport, which include: Goal setting, where when an athlete is posed with a threatening or complex situation - he or she may feel anxious or scared - therefore goal setting is able to help alleviate any anxiety that they feel and can help to benefit performance by: redirecting the athletes attention to achievable but challenging goals and by motivating the athlete to develop a variety of strategies that will help them to reach their goals. ?? ?? ?? ?? Erin Weeks - Unit 14 - Assessment Objective 6. Sport and Exercise Psychology. 1 OCR National Diploma in Sport - Explain the relationship between anxiety (including stress and arousal) and sport performance. ...read more.