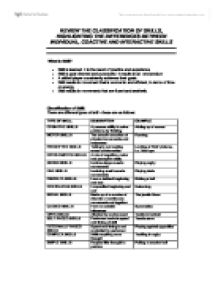 Review the classification of skills, highlighting the differences between individual, coactive and interactive skills.

REVIEW THE CLASSIFICATION OF SKILLS, HIGHLIGHTING THE DIFFERENCES BETWEEN INDIVIDUAL, COACTIVE AND INTERACTIVE SKILLS What is Skill? * Skill is learned. It is the result of practice and experience. * Skill is goal directed and purposeful. It results in an end product. * A skilled player consistently achieves their goals. * Skill results in movement that is economic and efficient, in terms of time or energy. * Skill results in movements that are fluent and aesthetic. Classification of Skill: There are different types of skill - these are as follows: TYPE OF SKILL DESCRIPTION EXAMPLE COGNITIVE SKILLS A persons ability to solve problems by thinking Adding up of scores MOTOR SKILLS The smooth execution of physical movements and responses Running PERCEPTIVE SKILLS Taking in and making sense of information Looking at 'trick' pictures, i.e.: third eye PSYCHOMOTOR SKILLS A mix of cognitive, motor and perceptive skills. ...read more.

Each of these elements can be thought of as a continuum. This means that two ends of the continuum are opposites and there is a gradual change in characteristics from one end to the other. In preparing a performer for competition, coaches might need to consider the nature of the interactions between competitors and the extent to which the opposition can affect their player's performance. Individual Skills are those that the competitor performs alone, without the physical presence of the opposition. Can you think of an example of a sport where the opposition is not present? Figure skating is an example of a sport in which competitors can, if they wish, largely distance themselves from each other, even before and after the performance. In a high jump event, other competitors are in the same area but they do not all perform at the same time and cannot physically affect performance, though they may exert psychological pressure. ...read more.

Highly interactive activities are those in which space is shared and in which body contact is allowed, for example Rugby or Football. There is potentially less interaction as less body contact is allowed in say, basketball, and less interaction still when players are separated, for example in tennis or volleyball. In theory, the greater level of interaction, the greater the potential for opponents to affect each other's performance. Thus maintaining possession and avoiding being tackled or intercepted are important tactics in invasion games. In conclusion, each sport has its own combinations of types of skill the performers need for it to be performed properly, safely and to a high standard. Due to this, some sports will not suit a particular person whereas another one will. Also, you can see that classifying skills, plays a big part for teachers and coaches, helping them to choose the most appropriate and effective ways of teaching their pupils and for the pupils to have the optimal quality of coaching possible. ...read more.