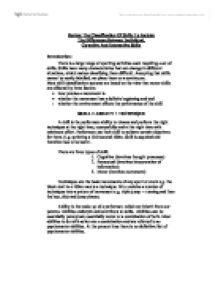 Review The Classification Of Skills To Include The Differences Between Individual, Co-active And Interactive Skills

Review The Classification Of Skills To Include The Differences Between Individual, Co-active And Interactive Skills Introduction: There is a large range of sporting activities each requiring a set of skills. Skills have many characteristics that can change in different situations, which makes classifying them difficult. Accepting that skills cannot be neatly labelled, we place them on a continuum. Most skill classification systems are based on the view that motor skills are affected by three factors: * how precise a movement is * whether the movement has a definite beginning and end * whether the environment affects the performance of the skill SKILL = ABILITY + TECHNIQUE A skill is the performers ability to choose and perform the right techniques at the right time, successfully and at the right time with minimum effort. Performers use their skill to achieve certain objectives for them. E.g. sprinting a 10.0 second 100m. Skill is acquired and therefore has to be learnt. There are three types of skill: 1. Cognitive (involves thought processes) 2. Perceptual (involves interpretation of information) 3. Motor (involves movement) Techniques are the basic movements of any sport or event e.g. ...read more.

These skills are usually closed skills, for example the javelin throw where the performer can within a reasonable amount of time take as long as he or she wants. The performer such as in the golf drive instigates self-paced skills; a player hits the ball when they are ready and not because they have been told to play the shot within a certain time range. Externally paced: skills are when an outside instigator such as the environment or opponent controls the timing of the performance of the skill by the performer. To control the rate of movement by the performer they must pay attention to the external events. Usually open skills involving alot of reaction on the performers part i.e. in football the performer must time his or hers actions with their opponents and teams mates as well as the ball. When a player passes a football he becomes the starter whom controls the start and when the return ball is played when it reaches his partner. The return ball though is not fully externally paces as his partner is able to choose whether he shall take the ball late or early. ...read more.

Therefore open skills are usually externally paced, and continuous e.g. a pass in rugby. Closed: skills are performed in more stable environments. They are self-paced and discrete skills. An example of this is in football: a penalty is a closed skill because the conditions are the same each time; the goal is 12 yards away. But in some situations the conditions are different such as in a free kick where the kick can be taken from many different positions on the pitch. This means that conditions are always changing. Because there are no outside physical influences on the performer, the closed skills can be improved which also makes training very easy. One a closed skill has been learnt they should be performed in exactly the same way each time. For example in football the penalty takers skill is exactly the same each time they take the penalty, because of no outside physical factors interfering. It all takes place in a stable, predictable environment so skills aren't affected and tend to be habitual. A closed skill such as this has a clear beginning and end, is self-paced and follows set patterns. Skills can be categorised on the continuum [right], between 0 (closed) and 10 (open), depending on the degree to which outside factors influence the performance of a skill. ...read more.