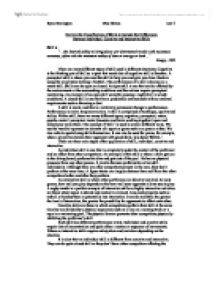 Review the Classification of Skills to Include the Differences Between Individual, Coactive and Interactive Skills.

Review the Classification of Skills to Include the Differences Between Individual, Coactive and Interactive Skills Skill is: "...the learned ability to bring about pre-determined results with maximum certainty, often with the minimum outlay of time or energy or both...' Knapp, 1963 There are many different types of skill used in different situations. Cognitive is the thinking part of skill so a sport that needs lots of cognitive skill is Snooker. A perceptual skill is where you read the skill to help you and give you time. Such as using the wind when kicking a football. The performance of a skill is known as a motor skill. Skills can be open or closed. An open skill is one that can be affected by the environment or the surrounding conditions and the actions require perceptual monitoring. An example of an open skill would be passing a rugby ball in windy conditions. A closed skill is one that has a predictable environment with no external requirements such as throwing a dart. A skill is learnt, and this is a relatively permanent change in performance. Performance is only a temporary action. ...read more.

The physical barrier prevents other competitors physically inhibiting the performer's skill. Each skill has different performance levels. Individual and coactive skills require lots of concentration and quite often a routine or sequence of movements. Where as interactive skills require anticipation and variation depending on the situation. It is clear that an individual skill is different from coactive and interactive. They can be quite closed skill as they don't have other competitors affecting the person in performing the skill perfectly. It is a skill that is performed in isolation and it is down to the performer to carry out the skill perfectly. It is therefore mainly their fault if they make a mistake. The other two skills are more like open skills with the pressure of other players or competitors playing with or against you as well as conditions i.e. weather or playing (poor surface etc.) A coactive skill is slightly different from an interactive skill. An interactive skill depends on the team players and the opponents, so your skill can be reflected as good or bad depending on your opponents. The physical presence of spectators also has an affect. ...read more.

It's a case for motivation. Some runners would respond to someone running past them which would encourage them to speed up and try and gain back the place. Others would drop their heads and think that they wouldn't be able to catch up to retake the place and just stop trying. Individual skills wouldn't have to deal with this problem, this is because, the performer has no guide of how the other competitors are doing as they are not competing at the same time, which means no real physical pressure therefore no physical affect on the skill. An interactive skill falls in between these two. It can depend on the opponents and their ability to pressure you into performing your skill badly. If they don't put you under pressure, you gain confidence and are able to perform that little bit better. In summary, although a skill can depend on ability, technique and quality, it is how we perform that skill and in the situation we perform it that can differ from one to the other all depending on a number of different factors. These factors may or may not be down to the performer, but it is up to the performer to overcome these factors and execute the skill perfectly. There is one skill but three ways it can be performed. ...read more.