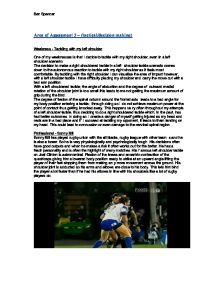 Rugby analysis - my weaknesses in tackling and passing and what I can learn from elite players.

Area of Assessment 3 - (tactical/decision making) Weakness - Tackling with my left shoulder One of my weaknesses is that I decide to tackle with my right shoulder, even in a left shoulder scenario. The decision to make a right shouldered tackle in a left shoulder tackle scenario comes down to the autonomous reaction to tackle with my right shoulder as it feels most comfortable. By tackling with the right shoulder I can visualise the area of impact however, with a left shoulder tackle I have difficulty placing my shoulder and carry the move out with a bad arm position. With a left shouldered tackle; the angle of abduction and the degree of outward medial rotation of the shoulder joint is too small this leads to me not getting the maximum amount of grip during the bind. The degree of flexion of the spinal column around the frontal axis leads to a bad angle for my body position entering a tackle; through doing so I do not achieve maximum power at the point of contact thus getting knocked away. ...read more.

His famous left shoulder tackle on Joel Clinton is astronomical. Flexion of the knees and eccentric contraction of the quadriceps giving him a lowered body position ready to strike at an upward angle lifting the player of their feet stopping them from making any more movement across the ground. His shoulder joint is adducted so his arms and elbows are close to his body. This lets him bind the player a lot faster than if he had his elbows in line with his shoulders like a lot of rugby players do. Weakness - Making the decision of passing left with right hand rather than both. This weakness is a bad habit and has become autonomous through playing for so long. The key skill- passing- is taught at grass roots level, therefore there is no reason I should pass with one hand rather than two as it is a basic skill. The decision to pass with one hand has often resulted well and taking the risk has often paid off. ...read more.

This decision can result in loss of possession or it can lead to a great pass, however the risk is sometimes not worth the gain. Professional - Jonny Wilkinson Throughout a short clip Jonny Wilkinson expresses the techniques that make him such a good rugby player. He starts of by talking about passing. He says that spreading of the hands maximises the handling of the ball. I also do this but with my right hand however Jonny uses two in all his technique guides. His hands cover most of the ball giving maximum grip allowing greater control over the ball. He further goes on to talk about the spin pass; for him he pushes against the ball with one hand and passes with the other; making the ball spin and travel fast and hard towards the target. Most to the point he always uses two hands, he says it helps using to hands as it is easier to handle the ball especially under pressure. This shows that he makes the decision to hold it with two hands as he knows the effects of pressure. ?? ?? ?? ?? Ben Spencer ...read more.