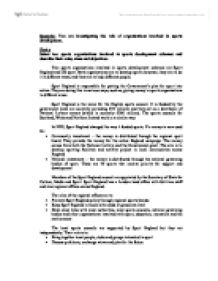 Scenario: You are investigating the role of organisations involved in sports development

The roles of the regional offices are to: * Promote Sport England policy through regional sports boards * Keep Sport England in touch with needs at grassroots level * Have close links with local authorities, local sports councils, national governing bodies and other organisations involved with sport, education, recreation and the environment The local sports councils are supported by Sport England but they act independently. Their role is to: * Bring together local people, clubs and groups interested in sport * Discuss problems, exchange views and plan for the future * To promote developments in local sports in the best interests of the community Sport England is also responsible for a network of ten centres run by the English Institute of Sport (EIS). ...read more.

* Retain people in sport and active recreation through an effective network of clubs, sport facilities, coaches, volunteers and competitive opportunities * Make sporting success happen at the highest level The role of UK Sport is to deal with high-performance sport at the UK level and aim to achieve sporting excellence for Britain. In order to do this, it: * Gives full support to top performers through the World Class Performance Programme and the UK Sports institute * Distributes National Lottery money to projects which promote and support sporting influences * Extends the UK's international sporting excellence * Encourages the world's major sporting events to come to the UK * Promotes ethical standards of behaviour * Is the UK's national anti-doping agency ...read more.