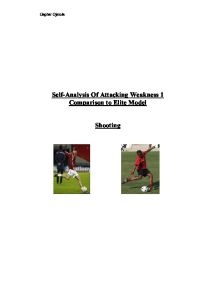 Self analysis of football performance - Comparison to elite model

Self-Analysis Of Attacking Weakness 1 Comparison to Elite Model Shooting Part B B1: Correct technical model of elite performer B2: Self-analysis of attacking weakness 1- Shooting Steven Gerard is a box-to-box central midfielder. He is currently the captain of Liverpool and plays for and is the vice-captain of the senior England team. Gerard is considered by many to be one of the best central midfielders of his generation. He is well known for; his powerful running with the ball, his wide range of accurate passing, accurate deliveries from set plays, unparalleled vision and his deadly shot. Gerard made his debut for Liverpool in November 1998, and since then he has become the club captain and led the team to many honours and trophies, including; UEFA Champions League, FA Cup, Carling Cup and the UEFA Super Cup. While picking up many honours himself on the way. He also has 90 caps England, making him one of the most senior players in the team. I have chosen to use Gerard as my elite performer comparison as he always shows consistent and effective technique in his, passing, shooting, tackling, heading, and dribbling. Preparation: Gerard prepares for a shot by approaching the ball at approximately a 45� angle taking long strides and plants his non-kicking leg firmly into the ground next to the ball, where there is extension in the quadricep group of the left knee and extension in the gluteus Maximus of the left hip. This diagonal approach produces greater swing-limb velocity for greater ball speed as a 45-degree angle of approach produces the greatest peak ball velocity, compared to a 15-degree or 30-degree run-up. He then raises both arms with his left arm slightly higher and his palms fully pronated. As he raises his arms, there is horizontal adduction in the anterior deltoid of both shoulders, especially the left shoulder as he raises his left arm higher for more support. ...read more.

Execution: Once he is near the opponent. He leans in with the leg furthest away from the attacker and attempts to push or hook the ball away with his foot as he slides in. When he leads with his right leg, his left leg is bent at a 90� angle. If he is chasing back towards his own goal and the attacker is ahead of him, he tries to get the tackling foot around the side of the player. As he makes the tackle, he tries to remain upright as much as possible in order for him to have full control over the tackle and not give away a foul. As he makes the tackle, his arms are raised in the air which shows that he is well balanced. After making the tackle, he stands up immediately and tracks back. Results: On average, Gerard attempts 8 slide tackles in a match and 6 of these are successful. He has a success rate of 80% which is extremely good for an attacking midfielder. Preparation: I approach the slide tackle similarly to Steven Gerard, first I ensure that the attacker is with my reach while also making sure that I am not behind the player in order not to give away a foul. I lead with my right leg mainly; at this point there is full extension at the knee of my right leg and also flexion in my supporting knee. Execution: During the execution of the slide tackle, my technique differs to that of Gerard. Unlike Gerard, my positioning makes me appear unstable as my arms are in different positions. One of my hands are resting on the ground, while the other is abducted away from my body horizontally, meaning that my centre of mass is not in a fixed point and I don't have full control over my movement. Because I am unbalanced, I am not able to perform the tackle as effectively as Gerard. ...read more.

Part C2- Correction of weakness How to correct weakness I can correct my weakness by imagining how I'm going to receive the ball before I receive it, this way I know exactly what to do. I can also take part in various drills which improve my first touch. Training plan Practicing The Skill - 2 players face each other roughly 5 - 10 meters apart with 2 cones to the side of them that are 3 ft apart. The first cone should be lined up parallel with each player with the second 3 ft in front. Player 1 passes the ball along the ground to player 2 who with his first touch lightly passes the ball through the 2 cones, then side footing the ball back to player 1. Swap over and repeat. Please see the diagrammatical representation below. Developing The Drill - 4 players start on each side of a square with 2 in the middle. There should be about 10 meters between each cone of the square. Player 1 in the middle receives the ball from player 6 on the outside and with his first touch creates space to pass back to one of the other players standing on either side of the square. No more than 2 touches can be taken. Player 2 is the defender. Swap over and repeat. Please see the diagrammatical representation below. Moving The Drill Into A More Realistic Game Situation- This Football Game is best played with no more than 7 players on each side and no goalkeepers so that each player has several opportunities to practice the skill. Each player has to play 2 touch. If more than 2 touches are taken, the ball is passed back to the defending side. Encourage players to find space to receive the ball and then create more space with their first touch. Game Situation - Finish with a normal game focusing on the object of the training session, encouraging players to create space with their first touch. ?? ?? ?? ?? Gaphar Ojetola ...read more.