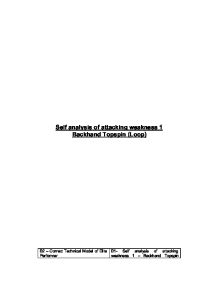 Self analysis of attacking weakness 1 Backhand Topspin (Loop) B2 - Correct Technical Model of Elite Performer B1- Self analysis of attacking weakness 1 - Backhand Topspin (Loop) Performer; Paul Drinkhall Is the UK's currently ranked number 1 table tennis player, he has competed in the commonwealth and Olympic games competing for England, with honours reaching to an Olympic silver medal and being crowned the European champion 3 times. In my opinion he has the best backhand topspin in the English game, and it shows consistency, accuracy, speed and tons of spin, which makes it extremely hard to return. The technique used by Paul is highly consistent ensuring near enough that every shot makes the table, putting the opponent of the back foot. This backhand topspin give him a fine edge over him opponent helping him to secure those three European championships. Preparation; During Paul Drinkhall's preparation phase to the backhand topspin he bends his knees and gets his head behind the ball, this then allows him to generate more spin, Getting his head behind the ball, allows for great accuracy and allows him to hit the ball every time, allowing great consistency to occur and allowing him to place the ball on the table wherever he feels he can gain an advantage over the opponent. He then brings his bat to a much lower position under to the table, this allows him to flick the power with the upper swing and generate the topspin. The knees have to be bent within the preparation phase, so the quadriceps contract whilst the hamstrings relax. Execution; When Paul hits the Ball his bat is almost fully closed but is just slightly open, this therefore ensures that minimal contact with the ball occurs, therefore creating a lot more spin. He brings the bat from a low position to high, flicking his wrist when contacting with the ball, this allows power within the shot and once again creating spin allowing for a powerful shot with a lot of spin to happen. ...read more.

Self analysis of Defensive Weakness 2 Forehand Push B2 - Correct Technical Model of Elite Performer B1- Self analysis of Defensive Weakness 2 - Forehand Push Performer; Paul Drinkhall Is the UK's currently ranked number 1 table tennis player, he has competed in the commonwealth and Olympic games competing for England, with honours reaching to an Olympic silver medal and being crowned the European champion 3 times. After watching Paul I can clearly see that one strength with in his game is the Forehand Push which he plays. I can clearly see the strength of this shot as it immediately puts him on the front foot of the point. The technique used by Paul is highly consistent ensuring that every ball in which he plays cannot be played back in an offensive manor therefore giving him a massive edge over the opponent as he can no longer be able to play his attacking game when this shot has been played. Using this shot has giving him the opportunity to win these championships and compete in the Olympic games for his country. Preparation In the preparation phase for the Forehand Push, Paul Drinkhall leans into the table with his right leg, this is because if he was to lean into the table with he left leg, it would be hard for him to reposition himself into if the opponent returned the ball to the backhand side. He opens his bat face so that when he connects with the ball there will be slight backspin applied. He also brings he left arm slightly back behind his body, to help maintain his balance when he takes his shot . Execution When Paul takes the shot there are a few mini procedures that need to go through in order for him to take the shot at such a high standard as he usually does. One of this procedures is to flick his wrist when he makes contact with the ball, the flick has to be sharp and quick, ...read more.

Another reasons for having this choice is that I will be getting into position regularly so therefore improving my consistency of correctness of the position needed to take the shot. This will just be a multi ball session where I will remain in position and the coach will play a number of b***s to the backhand side where I will attempt to play the shot down the line; This will improve consistency of the shot which I am playing this is because I will constantly be playing the shot and so therefore the technique will be embedded and I will automatically play the correct technique as it will be a habit. Playing an actual match up to 11, but when ever a ball comes to the backhand a topspin down the line must be attempted; This will improve my match consistency of the shot, allowing me to see when the best time to play the shot is. This will then make my game a lot more attacking overall, also the shot will improve eventually as I will be using it a lot more. Game up to 11; will improve my knowledge of when to use the shots within a game This will be "killer", which is about 3 different b***s being played, one to the backhand one to the middle and one to the forehand, where a forehand topspin shot has to be attempted with each shot played; Will improve my forehand topspin all around the table, but most importantly will improve me getting into position quickly and being able to move off to take another shot. Playing a game which involves a backspin serve to the forehand push to the backhand side where I have to open up down the line, then play the point out, and the game will be played up to 11; Will improve the overall technique and will allow me to get into position quicker to take the shot, as well as giving me knowledge when the best time to take the shot would be whilst in a gaming situation ...read more.