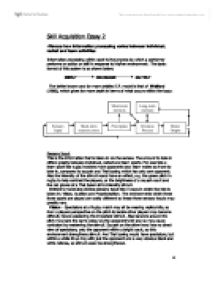 Skill Acquisition Essay 2 -Discuss how information processing varies between individual, racket and team activities. Information processing within sport is the process by which a performer performs an action or skill in response to his/her environment. The basic format of this system is as shown below; INPUT DECISION OUTPUT The better known and far more detailed I.P. model is that of Welford (1968), which gives far more depth in terms of what occurs within the body: Sensory Input This is the information that is taken in via the senses. The amount to take in differs greatly between individual, racket and team sports. For example a team sport like rugby involves more opponents and team mates so more to take in, compared to squash and Thai boxing which has only one opponent. Also the intensity of the stimuli would have an effect, e.g. the green pitch in rugby to help contrast the players, or the brightness of a squash court and the red gloves of a Thai boxer all to intensify stimuli. Welford's model also divides sensory input into 3 ways in which the info is taken in; Vision, Audition and Proprioception. The environments which these three sports are played are vastly different so these three sensory inputs may greatly vary. Vision - Spectators at a Rugby match may all be wearing replica kits, so from a players perspective on the pitch to locate other players may become difficult, hence weakening the important stimuli. ...read more.

Short-term Sensory Store All information taken through the senses is stored for a split second in the short-term sensory store before being processed, after which the information is lost and replaced. Between team, racket and individual sports there is no differences for this component, other than the fact that within a team game there will be more input than within a racket or individual, considering more team players, more opponents and larger crowds. Perception Perception is the stage where we identify the irrelevant and relevant inputs, known as selective attention. Again, as team sports have more input there would be greater time spent on judgment of what is relevant, thus slowing down the I.P. model creating less time for the motor output. However, an expert at the sport being performed may recognise relevant information faster than a novice and therefore the I.P. model may not be slowed down. Short-term Memory The relevant information is then stored in the short-term memory for only 1 minute and has a capacity of just 7-10 pieces of information. For a team sport, with so many relevant inputs, that 7-10 pieces may not be enough to effectively judge how to react in a certain situation. However in a squash game, there is little input and most probably enough to store in the short-term memory. ...read more.

Whereas an open skilled sport like rugby requires all sorts of combinations of movement patterns so would take longer to initiate. Other factors also affect the I.P. model. Time available; large amounts of time allow greater consideration of possibilities yet can think to deep and make incorrect decisions. Psychological state; a player at psychological peak will react and respond more quickly with greater accuracy. This can be arousal or motivation, as we all know poor motivation will lead to poor performance. Elite/novice; experience leads to bigger chunks of info. Generally speaking, from analysing the variation of the I.P. model between team, racket and individual sports it can be seen that the more open skilled the sport is, the longer the I.P. model will take to produce an output, therefore reaction time is slower; Response Time = Reaction Time + Movement Time. In other words, team sports theoretically should take longer to perform outputs than racket sports, and racket sports longer than individual sports. This is also influenced by many other factors too, like experience, the difference between elites and amateurs, time available, psychological state and intensity of stimuli etc. To conclude, it would seem that I.P. within team sports would be slower than within racket sports; and racket sports slower than individual, which may explain why in team sports more errors occur i.e. the interception of a pass, a knock on and say a missed tackle. ...read more.