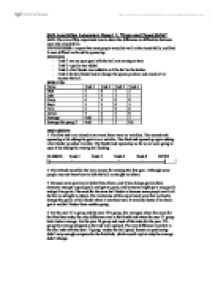 Skill Acquisition Laboratory Report 1: "Open and Closed Skills" AIM: The aim of this experiment was to show the difference in difficulties between open and closed skills. HYPOTHESIS: I expect that most people would do well in the closed skills, and find it more difficult as the skills opened up. METHOD: - Task 1 was an open goal with the ball not moving to start. - Task 2 a goalie was added. - Task 3 a ball feeder was added to roll the ball to the kicker. - Task 4 the ball feeder had to change the speed, position and could roll or bounce the ball. ...read more.

The third task opened up again adding a ball feeder as anther variable. The fourth task opened up as far as we were going to open it by adding the varying ball feeding. CLOSED Task 1 Task 2 Task 3 Task 4 OPEN 2: The attitude would be the main reason for missing the first goal. Although some people may not know how to kick the ball as straight as others. 3: Because some goalies are better than others, and if you change goalies then someone may get a good goalie and get no goals, and someone might get a c**p goalie and get five goals. ...read more.

For the year 10 group and most of the tasks for the year 11's group the average dropped as the task were opened. The only difference was that in the final task with the year 11 group, maybe the ball speed, bounce or positioning didn't vary enough compared to the third task, which would explain why the average didn't change. 5: For task two, matt's result of 0, this was very unusual, he wasn't really trying though; he was just kicking the ball as hard as he could. CONCLUSION: My hypothesis was correct until the last task, which the year 11 group got the same average as the task before. The aim and results where conclusive, as you opened a skill, the chance of scoring is more difficult. ...read more.