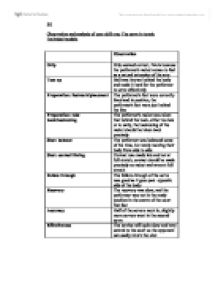 B1 Observation and analysis of core skill one: The serve in tennis Technical models Observation Grip Grip seemed correct, this is because the performer's racket comes to feel as a natural extension of the arm Toss up Ball was thrown behind the body and made it hard for the performer to serve effectively Preparation: footwork/placement The performer's feet were correctly lined and in position, the performer's feet were just behind the line Preparation: take back/backswing The performer's racket was taken that behind the back, either too late or to early, the backswing of the racket should be taken back precisely Shot: balance The performer was balanced some of the time, but rarely moving their body from side to side Shot: contact/timing Contact was made late and not at full stretch, contact should be made precisely as racket and arms at full stretch Follow through The follow-through of the serve was good as it goes past opposite side of the body Recovery The recovery was slow, and the performer was not in the ready position in the centre of the court that fast Accuracy Half of the servers went in, slightly more servers went in the second serve Effectiveness The service will quite slow and very central to the court so the opponent can easily return the shot Serve success rate B1: Demonstration situation Core skill one: The tennis serve I set up an experiment in which I asked my performer to complete 10 serves in each box of the tennis court. I used a camcorder to record his attempts and completed a results table to show his level of success. The data I collected was interval in nature. Therefore I calculated the mean as a suitable form of data analysis. This is because the data had a definite and implied order. 1st serve (right box) 2nd serve (right box) 1st serve (left box) ...read more.

I used a camcorder to record his attempts and completed a results table to show his level of success. The data I collected was interval in nature therefore I calculated the mean as a suitable form of data analysis. This is because the data had a definite and implied order. The lob is a complex skill. To test my performer's ability on how to lob the ball over an opponent, he will have to draw the opponent towards the net and then play it over them and into the court. My performer's drop shot is consistently good and so I will ask my performer to play a backline to backline rally and then do a drop shot and then successfully lob the opponent. Lobs played to the left side of the court successfully Lobs played to the right side of the court successfully 8/10 7/10 80% 70% You can see that my performer's ability to lob is consistently good. A high percentage of the shots were successful. 70 to 80% of the shots were winners. My performer used this type of shot to his advantage a few times which won him a few points. This type of shot was good because the contact and follow thought were timed precisely. Also the balance was the footwork was good which allowed him to play the perfect lob Early preparation and footwork The model is in the ready position and is ready for the incoming shot. The racket is facing the opponent and the model is focusing on the ball with the correct grip Take back/backswing The performer is effectively taking the racket back from low to high. The models left foot is placed forwards and that racket is take it back under the ball to generate lift in the ball Contact/timing The model at times the shot perfectly while keeping the left foot placed forwards. You can see that the arm is under the ball which causes that racket to open and face skywards to allow ...read more.