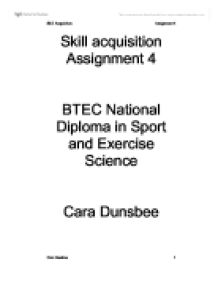 Skill acquisition Assignment 4 BTEC National Diploma in Sport and Exercise Science Cara Dunsbee Brief - "Skill is learned; knowledge of how learning occurs is important to coaches and teachers in order to modify a performer's behaviour and produce the desired response. Investigate the proposed theories of learning and how they are used in the practical environment." "Learning can be considered a more or less permanent change in performance associated with experiences but excluding changes which occur through maturation and degeneration or through alternations in the receptor of Effector organs" (Knapp 1973) I am now going to give the main points of the different learning theories, and explain the differences between them, using examples from sport to describe how each of the theories can be used in a teaching or coaching action. Connectionist or Association Theories. These theories rely on the learner linking a stimulus from the environment with a movement. This stimulus may take the form of a problem. For example in a water polo match the centre forward might be ball side of the centre back. In response to this the ball will get played in to the centre forward. The player defending at the top of the arc on position 3 would drop back to help. If this was found successful then this response becomes connected/ associated with the stimulus and stored in the long term memory. This type of connection is called a learning bond and can be recalled and repeated at any time if a similar situation should occur. To learn like this a coach should 1. Structure the situation in training, setting up an ark and telling the players exactly what the need to do. 2. Apply reinforcement. 3. Shape behaviour in small parts of steps. 4. Use trial and error learning. Strengths and weaknesses in this theory. One of the weaknesses of this theory is that water polo is a game where the surroundings are constantly changing. ...read more.

Connectionist or association theory is that learning occurs from a stimulus in the environment with a movement. Where as the cognitive learning theory is that a learner learns by using there intuition to solve a problem. And that the problem needs to be seen as a whole and not broken down in to parts. Differently again the social learning theory states that "other people influence behaviour." Learners will copy an advanced player and try to do exactly what they see. A similarity of all 3 of these learning theories is that learners need to be motivated and have positive feedback to perform a skill correctly. Similarities between Cognitive and connectionist or association theories are that they both allow trial and error / experimental time for the learner while they are learning the skill. However in the connectionist or association theory the coach has slightly more control over what the learner is doing. Motor programmes. A motor programme specifies what movements the skill is composed of and the order in which they happen. For example when performing a pass off the water in water polo a player will * Move the ball close with there bad hand (hand that doesn't pick up the ball) * Pick the ball up from underneath with the throwing hand. * Rotate throwing arm and ball around keeping elbow at a 90 degree angle. * Throw the ball * Follow threw slapping the water in front and pointing middle finger were the ball needs to go. These stages are called sub routines. Most skills are made up of a series of sub routines. This is called an executive motor programme. A motor programme comprises "an executive programme and its sub routines. An executive motor programme is a plan of the whole skill or pattern of movement. This plan is stored in the long term memory and through a process known as feedback is updated and modified each time a skill is preformed. ...read more.

These principals can be applied to the learning of all skills." (Btec national diploma in sport and exercise science book page 134) Benefits and problems The benefits of transfer are that if you are good at one skill that is relevant to another in the same sport or in a different sport you will find it easier to do. However a problem of transfer is that a skill could be completely different in one sport to another, for example competitive swimming and water polo swimming. If this is the case the athlete could find it harder to get to grips with the techniques the need to be a good competitive swimmer. I am now going to list some sporting examples and say which type of transfer they fit in to. You have knowledge of badminton and try to learn tennis. This would be a positive transfer in terms of having the hand eye co-ordination and knowing when to strike the ball however it could be a negative transfer because the racquets are different sizes. So you might not connect correctly with the tennis ball. You have knowledge of squash and try and learn tennis this could be either a negative or a positive transfer because again you would have the co-ordination needed but squash demands the ball is kept low where as in tennis you need to give the ball some height so it travels over the net. You have knowledge of netball and try to learn basket ball. This would be a positive transfer in terms of having the knowledge of were to throw the ball and being able to steal the ball, but it would be a negative transfer because of the rule differences for example you are not aloud in certain parts of a net ball court and you are not aloud to run with the ball in net ball. ?? ?? ?? ?? Skill Acquisition Assignment 4 Cara Dunsbee 1 ...read more.