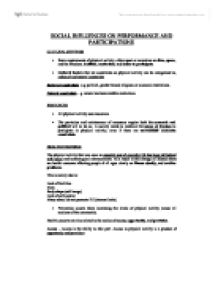 Social influences on performance and participations

SOCIAL INFLUENCES ON PERFORMANCE AND PARTICIPATIONS CULTURAL SETTINGS * Basic requirements of physical activity, either sport or recreation are time, space, and the freedom, facilities, motivation, and desire to participate. * Cultural factors that are constraints on physical activity can be categorised as, enforced and natural constraints. Enforced constraints- e.g. political, gender-based, religious or economic restrictions. Natural constraints - .g. natural and unavoidable restrictions. RESOURCES * All physical activity uses resources. * The provision and maintenance of resources require both the economic and political will to do so. A society needs to embrace the notion of freedom to participate in physical activity, even if there are unavoidable economic constraints. HEALTH CONCERNS The physical activity that was once an essential part of everyday life has been left behind with social and technological advancements. As a result in this change of lifestyle there are health concerns affecting people of all ages clearly on fitness obesity, and cardiac problems. This is mainly due to: Lack of facilities Diets Body shape (self image) Lack of self-control Many school do not promote P.E (interest lacks) * Prevention occurs when increasing the levels of physical activity across all sections of the community. Health concerns are also related to the notion of access, opportunity, and provision. Access - Access is the ability to take part. Access to physical activity is a product of opportunity and provision. ...read more.

Many participants think they are simply 'too old for sport are not for them'. STEREOTYPES Making the mockery out of the performers, e.g. 'footballers are dumb', 'girls can't fight'. This can have an effect on whether or not people take part in sporting activities. Stereotypes are usually abound within groups normally considered to be disadvantaged of discriminated. There are 2 times of stereotypes: Negative stereotypes - vies that do little to advance the causes of the groups. Positive stereotypes - challenge traditional or negative stereotypes and enhance the mage of particular group. ESTEEM The perception that minority groups have on themselves and how this might affect their decision to participate in sport. STACKING A selection process to determine the ranking or pecking order in which outside groups should be placed, e.g. hierarchy.... Centrality refers to the centralised control exerted by the dominant cultural influence. E.g.- 1ST USA 2ND WESTERN COUNTRIES 3RD EASTERN EUROPEAN COUNTRIES... SELF-FULFILLING PROPHECY Expectations. The self-esteem of cultural groups who find themselves low in the stacking order is hardly to be high. Policies of exclusion in sport and recreation simply serve to reinforce what is almost a self-fulfilling prophecy of low expectations and achievements. TARGET GROUPS Where specific groups are targeted for particular finding or provision. For any targeting to be effective, such groups are identified as sub groups of a larger disadvantaged group. ...read more.

Therefore changing views and social values must inevitably find their way into any current sporting mortality. The potential rewards for the success often outweigh any such moral considerations. However, this term is sometimes replaced by gamesmanship, which is the intention to compete to the limits allowed by the rules and beyond, if that is achievable without penalty. Deviance in the Olympics can also occur by relating to the use of drugs. In the last 20 years, drug taking has become a very common part of top class sport, in spite of the efforts of various national and international doping committees. It appears that the chemist supplying sportspeople with drugs are trying to keep one step ahead. However, there are problem with defining how the use of drugs can be deviant in sport. A simple way of explaining deviance in sport is any behaviour designed to gain unfair advantage by the means of: - Gamesmanship - Interfering with equipment - Knowingly taking banned substances for the purpose of gaining unfair advantage... Ben Johnson demonstrated an example of deviance in sport. Johnson decided to gain advantage from the use of steroids. He was stripped of his medal and banned from athletics for life. The latest challenge centres on the use of EPO, which increases blood oxygenation by forming additional red blood cells. This improves stamina and the drug can be produced comparatively cheaply. The IOC anti doping campaign is based upon 3 principles: - The protection of athletes - Respect for medical and sports ethics - Ensuring an equal chance for everyone during competitions. ...read more.