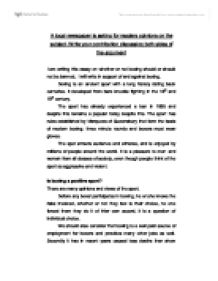 A local newspaper is asking for readers opinions on the subject. Write your contribution discussing both sides of the argument I am writing this essay on whether or not boxing should or should not be banned, I will write in support of and against boxing. Boxing is an ancient sport with a long history dating back centuries. It developed from bare knuckle fighting in the 18th and 19th century. The sport has already experienced a ban in 1865 and despite this remains a popular today despite this. The sport has rules established by Marquees of Queensbury that form the basis of modern boxing: three minute rounds and boxers must wear gloves. The spot attracts audience and athletes, and is enjoyed by millions of people around the world. It is a pleasure to men and woman from all classes of society, even though people think of the sport as aggressive and violent. Is boxing a positive sport? There are many opinions and views of the sport. Before any boxer participates in boxing, he or she knows the risks involved, whether or not they box is their choice, no one forced them they do it of thier own accord, it is a question of individual choice. We should also consider that boxing is a well paid source of employment for boxers and provides many other jobs as well. ...read more.

Finally if the sport was to be banned it would continue to exist "underground" this would make the sport extremely unstable and dangerous, the boxer would be fighting without basic rules and training, and a without any presence of medical professionals or equipment. Underground boxing is illegal but if boxing is banned it would still exist. It is possible that if boxing was banned the people who support it would protest and there would be an uproar as with fox hunting. Boxing matches are also held for charity were professional boxers fight for a paying audience were the money is donated to charity. The BBBC are still making changes, to make this sport safer. The sport is now safer than sports such as show jumping, which the no talk to ban. Here is a series of quotes from the Daily Express (summer 2004) regarding Amir khan's silver Olympic, display that boxing is extremely positive, "Kahn is flying the flag for Asian sport." this shows the sport is successful for all people whatever race or background. " he can make an impact beyond the Olympics and improve race relations in Britain." this also strongly supports boxing. Jane Couch was the first woman to be licensed by the BBBC she says " I've gained friends and a lot of respect. ...read more.

Oliver was looking "weak and drained" but still the fight continued. After falling to the canvas looking like " a scared young child seeking solace" he later became unconscious. This happened mainly because his opponent was at the top of his weight category were as Oliver was only there by a few pounds. A writer, Niall Hickman, states boxing " I or anyone say to defend it while yet another young body lies in hospital". more quotes from the Daily Express (summer 2004) against boxing are, referring to Amir khan's Olympic fight are " his opponent had been demolished." the word demolished suggest that the opponent has been completely destroyed. From this is there much hope in boxing surviving. Conclusion I have decided to support boxing, even though the sport causes many injuries it is still the boxers' freedom of choice whether or not to box and the audiences' choice to watch. If it were to be banned it would cause protest as with fox hunting, it would still go on even If it were banned. Further more there are more positives to come from boxing than negatives. Boxers to that to participate in the sport means to get hurt . I strongly believe that it is the boxers choice , they know the risks. If a person wants to box it should be completely their own personal choice to decide what career they pursue. If people disagree with the sport then to participate in any area to do with the sport. ...read more.