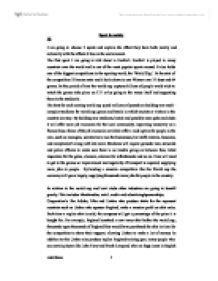 Sport in society P3 I am going to choose 2 sports and explain the affect they have both locally and nationally with the affects it has on the environment. The first sport I am going to talk about is Football. Football is played in many countries over the world and is one of the most popular sports around. It also holds one of the biggest competitions in the sporting world, the 'World Cup'. At the start of the competition 32 teams enter and it boils down to one Winner over 31 days and 64 games. In this period of time the world cup captures billions of people world wide to watch the games take place on T.V or by going to the venue itself and supporting them in the stadium's. The host for each coming world cup spend millions of pounds on building new multi-complex-stadiums for world cup games and hotels in which tourists or visitors in the country can stay. By building new stadiums, hotels and possibly more pubs and clubs it will offer more job vacancies for the local community, improving massively on a finance base. Some of the job vacancies available offer a wide option for people in the area, such as managers, secretaries to run the businesses, bar staff, caterers, bouncers, and receptionist's along with lots more. Stadiums will require grounds men, stewards and police officers to make sure there is no trouble going on between fans, ticket inspectors for the gates, cleaners, caterers for refreshments and so on. Fans will need to get to the games so improvement and regularity of transport is required, supplying more jobs to people. By hosting a massive competition like the World cup the economy will grow largely, supplying thousands more jobs for people in the country. In relation to the world cup and local clubs other industries are going to benefit greatly. ...read more.

In addition to this they also need to address a club set of rules where Ethics and Values are intact, this help's the up bringing and attitudes of youngsters. These funding solution's are major important to our local clubs and schools because it allows us to create a new generation of sports, for example giving equal opportunities to everyone so that know talent can be missed. It also occupies young children and takes them off the streets where they would be causing trouble in the neighbourhood. This can be effective enough that it can reduce the amount of crimes that are committed, so there is every reason why funding is so important in to local sports clubs. Relating to Football, Funding was very different to the earlier 19th century era; very little money was produced in sports until it became professional. As the popularity of the sport was ever increasing, more and more people flooded to watch a Football match. This meant that special stadiums needed to be built, as these happened owners would charge supporters to enter the ground and a hope to attract the best players possible. 'Broken time' wages would go to players to make up their loss of earnings from work on that day. Many people were unhappy about this decision, mainly the upper class as they started to see the game crumble from the amateur spirit. A gentlemen's club called 'the Corinthians' however refused to play for money and in cup competitions and even refused to take penalty and free-kicks as they believed know one could possibly commit a foul. Funding is equal to all sports as Cricket, Hockey and Football clubs all get the same opportunities to develop their facilities. This is a great benefit to people as organisation's like Sport England do not sway people's decision's to what sport they would rather you play by funding in it more. ...read more.

For example, most voluntary sports clubs offer discounted prices for those who are unemployed or are students, i.e. people at university or college. Prices can be halved from �120 to �60, so this makes it much cheaper for those who struggle financially. If the prices are still too high they can attend courses which are paid for by national governing bodies, organisations or seek a small sponsorship to pay for them. If a person works shifts they will have to plan their exercise accordingly for example when they get spare time on some weekday's and weekends, it will have to be fitted in during this time. It may require some sort of timetable or training programme to know what days and what exercises they have to do per week. Racial discrimination is another issue which effects participation in sport considerably, for example golf, a majority of members are white. This may cause the person of the opposite race to feel uncomfortable therefore not wanting to be a member of the club. My suggestions would be to join a club which it has mixed cultures as there will be some about. Further more so, you could invite a group of friend's to play with each time you go, who is the same race. This may put you at ease as you will not be the only person of that race. Health problems If a person is slightly overweight they may be embarrassed to join a gym or sports club because they are too embarrassed with the way they look. There is a positive solution for this as there are organisations for people who are overweight, i.e. weight watchers'. There will be a considerable amount of people with the same problem wanting to loose weight and be able to feel comfortable about themselves. So joining this will build their confidence, helping them loose weight at the same time. After this they may have enough confidence to workout on their own according, to get fitter and build more confidence. Josh Stone 1 Josh Stone 1 ...read more.