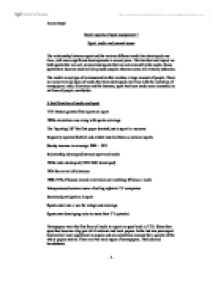 Social aspects of sport assignment 1 Sport, media and current issues The relationship between sport and the various different media has developed over time, with more significant developments in recent years. This has had and impact on both sports that are well covered and sports that are not covered by the media. Some sports have become multimillion-pound empires whereas some are virtually unknown. The media is any type of communication that reaches a large amount of people. There are many various types of media that have developed over time with the invention of newspapers, radio, television and the Internet; sport has been made more accessible to millions of people worldwide. A brief timeline of media and sport 1733 Boston gazette first reports on sport 1800s circulation rose along with sports coverage The "sporting life" the first paper devoted just to sport is a success Regularly reported football and cricket instilled them as national sports Steady increase in coverage 1900 - 1975 Relationship developed between sport and media 1920s radio developed (1922 BBC developed) 1936 the arrival of television 1988, 97% of houses owned a television set watching 28 hours a week Entrepreneurs became aware of selling rights to TV companies Increased participation in sport Sports enter into a war for ratings and coverage Sports start developing rules to assist their TV potential Newspapers were the first form of media to report on sport back in 1733. Since then sport has become a big part of all national and local papers. In the last ten years sport has become more significant in papers and can sometimes account for a quarter of the whole papers stories. There are two main types of newspapers. Tabloids and broadsheets. Tabloids are papers like The Sun, The Mirror, The Mail, and the Sunday versions of the papers like The News of the World and the Sunday people. Tabloids usually focus on a few sports that are usually the most popular sports such as football and cricket. ...read more.

Other athletes who don't use drugs have to deal with theses problems in other ways such as training harder, resting injuries and learning relaxation techniques. It takes allot of hard work and dedication to become a top level athlete and it is unfair for someone to use drugs and cheat there way to the top. Drugs do not always have positive effects on athletes taking them. There are more often than not side effects from every drug. Some potentially fatal side effects. Sport is meant to be about enjoyment and a natural way to stay healthy. Polluting the body with drugs is not safe and far from the ideals most have for taking part in sport. This being said there are many different complicated reasons why an athlete may take drugs. A performer maybe depressed and fed up of coming second all the time and so take drugs as a boast to win. They may feel like they have reached their peak and are not improving in training or competition and so may turn to drugs. Some of the drugs athletes take are not always directly performance enhancing. Recently Chelsea's Adrian Mutu got caught taking a substance that is claimed to help him relax. It may not directly enhance his game but it would improve his performance as nerves and self-doubt would be less outside of the game so his confidence would grow. Some athletes take drugs unknowingly, or at least they claim too. This maybe through taking supplements without checking what's in them or by their coach tricking them into it for personal gain. It may even be when taking prescribed medication from a doctor for an illness. The Association of Tennis Professionals has decided to give all tennis players who want supplements a limited number of supplements produced in a highly controlled environment. This is due to the number of tennis players who failed drugs test for the banned substance Nandrolone. ...read more.

Many Jewish communities, in various countries, asked for a boycott of these Games. Hitler failed in his attempt to use the Games to prove his theory of racial superiority. As Jesse Owens, an American black athlete, won four gold medals in the 100m, 200m, long jump and the 4 x 100m relay The effects of commercialisation on the Olympics This comes in two main forms the sponsorship of the Olympics and selling of the broadcasting rights. As with sport themselves the games have to be a product someone will want to buy the right to. To help assure this the games have: * Sports stars from around the world * Events where non profession only athletes can compete * The possibility of seeing world records * Changing the sports to keep up viewer interest The money that paid for the 2000 Olympics in Sydney was split like this * $1331 million from broadcasting rights (45%) * $550 million from TOP 4 (18%) * $492 million from local sponsors (16%) * $551 million from ticket sales (19%) * $52 million from licensing (2%) (Sydney Olympic report) The money for the 2004 games will look like this: * $2236 million from broadcasting rights (50%) * $1815 million from corporate sponsors (40) * $380 million in ticket sales (8%) * $100 million in merchandise (2%) (Brown et al 2003) This shows a massive jump in the money paid and shows how media is still affecting the commercialisation of sport now. The money that this generates is then split between the IOC and the 199 national Olympic committees. Media and commercialisation in general hugely influence the Olympic games and sport. This can be anything from politics to drugs, money to medals and glory. Without media sport wouldn't be as popular and successful as it is today but I feel that sport has become this way for the wrong reasons. More people are interested in the scandals and the need to win than in the actual sport has been forgotten. Sports for sports sake doesn't happen anymore. It is more sports for moneys sake. ...read more.