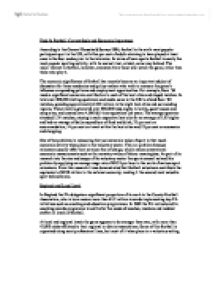 Task 5a Football: Current Scale and Economic Importance According to the General Household Survey 1996, football is the sixth most popular participant sport in the UK, with five per cent of adults claiming to have played at least once in the four weeks prior to the interview. In terms of team sports football is easily the most popular sporting activity, with its nearest rival, cricket, some way behind. The major interest in football, however, emanates from those who watch the game, rather than those who play it. The economic significance of football has recently become an important subject of discussion for those academics and policy-makers who wish to measure the game's influence on spending patterns and employment opportunities. For example, Euro `96 made a significant economic contribution to each of the host cities and staged matches. In total over 280,000 visiting spectators and media came to the UK to attend Euro `96 matches, spending approximately �120 million in the eight host cities and surrounding regions. These visitors generated over 900,000 beds-nights in hotels, guest houses and camp sites, and created over 4,000 full-time-equivalent job years. The average spectator attended 1.24 matches, staying in each respective host city for an average of 1.05 nights and had an average of daily expenditure of food and drink, 21 per cent on accommodation, 14 per cent on travel within the host cities and 12 per cent on souvenirs and shopping. ...read more.

Grassroots (voluntary) There are over 46,000 Voluntary sector football clubs in the UK, with a combined membership of 1.6 million. Most voluntary football clubs rely heavily on income from subscriptions, small sponsorship arrangements, donations and a range of fundraising activities. In a growing number of cases, clubs have been successful in securing grant aid from sources like the Lottery, the Football Trust and Playing fields Associations. Media and Sponsorship Football has always been a sport with a high media profile. The game's enduring popularity has meant that the media have not been slow to use football as a means of attracting large audiences. We have already seen how mass-circulation newspapers like the Sun and the Mirror use football to secure their market position. The same is true for television. Football has a broad appeal that may be spreading further due to its continuing use of better marketing. However, this does not mean that the media fail to recognize the main characteristics of their audience. In addition, Sky has also looked closely at the demographic profile of its viewers in a bid to develop coverage that best suits their needs. Effects of television on football participation The continued growth of football as a television sport has ensured that the exploits of team and individual players are never far from the spotlight. One of the benefits of this is the positive role that television can play in encouraging more people to become involved with the sport. ...read more.

Certainly, most tennis providers admit that their peak periods fall during or immediately after televised tournament like Wimbledon. What really adds to the impact of television, however, is when home grown players perform well in high-profile events like Wimbledon or the Davis Cup. Tennis and Football: Education (Development of P.E) Physical Education is a modern phenomenon less than 100years old; however its origin goes back even further than this and was developed from many different strands. The two main traditions of education basically were: 1. Public (Private) school sports education 2. State Schools (Government) outside private schools - Private schools funded by parents (residential) - Outside private schools funded by government Public School Sports Federation - organized games - recreational based/good facilities/ rules - Recognized that education objectives could be passed on through games - Became important feature in schools - Team games formed central core/tennis/rugby/hockey/athletics - Based on co-operation and leadership State Elementary Schools - Lower class/free/cramped - Physical training / Military drills - Valued for discipline - Social control values - Small facilities/lack of equipment - simple games/football As part of the Education Reform Act (1988) all primary and secondary schools have a legal duty to deliver physical education as part of the National Curriculum. In 1992 the then department for Education and Science published the first National Curriculum specifications for PE, which clarified the broad areas of physical activity that children would need to undertake. These areas incorporated: - Games - Swimming - Gymnastics - Athletics - Outdoor and adventurous activities - Dance ...read more.