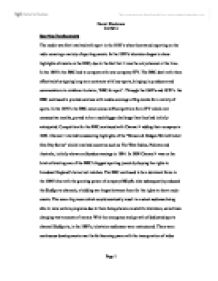 Sporting Developments The media was first involved with sport in the 1920's when they stared reporting on the radio covering a variety of sporting events. In the 1930's television began to show highlights of events on the BBC, due to the fact that it was the only channel at the time. In the 1950's the BBC had to compete with new company ITV. The BBC dealt with them effectively by signing long term contracts with key sports, bringing in producers and commentators to reinforce its claim; 'BBC for sport'. Through the 1960's and 1970's the BBC continued to provide services with media coverage of big events for a variety of sports. In the 1970's the BBC came across stiff competition from ITV which over consecutive months, proved to be a much bigger challenge than they had initially anticipated. Competition for the BBC continued with Channel 4 adding their company in 1982. Channel 4 started broadcasting highlights of the "Benson & Hedges World Cricket One-Day Series" which involved countries such as The West Indies, Pakistan and Australia, initially shown on Sunday evenings in 1984. In 1998 Channel 4 was on the brink of stealing one of the BBC's biggest sporting jewels by buying the rights to broadcast England's home test matches. ...read more.

Governing bodies were then willing to respond to the needs of television which increased the activity of sports entrepreneurs from outside the traditionally rooted world of the governing bodies. Jack Kramer, Kerry Packer, Mark McCormack, Horst Dassler and Rupert Murdoch of the news corporation are key figures. The development of cricket came about though Kerry Packers' economic power. His own World Series Cricket show was shown under floodlights. It meant that there were more cameras, resulting in close-up replays. Continuous developments brought about the introduction of coloured clothing and hard sell advertising which has resulted in a major development in the world of cricket. The development of televised sport in the United States shows other examples of the dramatic speed and scope of commoditisation and commercialisation. In the earlier days of broadcasting, television was used more as a way to bring sports together with sponsors. In the 1960's ABC television made a massive breakthrough for televised sports with the intention of personalisation, dramatised and spectacularisation. At the start of the twentieth century there was a significant expansion in woman's athletics. In North America there were sporting chances for the working class woman. ...read more.

Gender equality has still not been achieved in some countries and some nations continue to only send male athletes to represent them in the Olympic Games, even if they were in medal contention. In other sports such as golf, woman's playing times were restricted, there were separate club houses and separate tee's (which are still around to this day) which make holes shorter in distance. Golfing rules meant that women were not allowed to wear shorts as their sporting attire, in order for officials to recognise and distinguish differences between the male and female members. To summarise, it is known that there were continuous developments within the twentieth century. Points made here show that commercialisation has played a big part within sport as television and sponsorship is crucial for financial survival. Media coverage developed extensively with more competitors to show sport. Even though the BBC was in control for most of the twentieth century, SkySports' growing power to outbid anyone has made them unstoppable. There have been small developments in Women's sport but still equality is an issue. Reference list Cashmore Ellis, (1996). Making sense of Sports second edition: Routledege Coakley Jay & Dunning Eric, (1999). Handbook of Sports Studies: Sage Publications Coakley Jay, (2003). Sports in Society issues and controversies Eighth Edition ?? ?? ?? ?? Daniel Blackman 2467951 Page 1 ...read more.