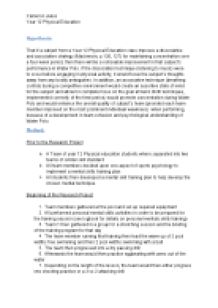 ﻿Cameron Jukes Year 12 Physical Education Hypothesis: That if a subject from a Year 12 Physical Education class imposes a dissociative and associative strategy (Mackenzie, p.126, 127) for maintaining concentration over a four week period, then there will be a noticeable improvement in that subject?s performance in Water Polo. If the dissociation technique (listening to music) were to occur before engaging in physical activity, it would focus the subject?s thoughts away from any bodily ambiguities. In addition, an associative technique (breathing control) during a competitive environment would create an assertive state of mind for the subject and allow for complete focus on the goal at hand. Both techniques, implemented correctly of the time period, would promote concentration during Water Polo and would enhance the overall quality of subject?s team (provided each team member improved on the most prominent individual weakness) when performing, because of a development in team cohesion and psychological understanding of Water Polo. Method: Prior to the Research Project 1. A Team of year 12 Physical education students where separated into two teams of similar skill standard 2. All team members decided upon one aspect of sports psychology to implement a mental skills training plan 3. All students then developed a mental skill training plan to help develop the chosen mental technique Beginning of the Research Project 1. Team members gathered at the pool and set up required equipment 2. ...read more.

for maintaining concentration over a four week period, then there will be a noticeable improvement in that subject?s performance in Water Polo. This research task was conducted in order to investigate the effect of psychological skills training on the physical water polo performance of a Year 12 physical education class. The graphs and tables above display the results calculated from data collected throughout the investigation and suggest interesting inconsistencies with the hypothesis. Association is a cognitive strategy in which the individual attends to the body?s internal related cues such as muscle tension and breathing (Morgan, 1980) and/or external performance information such as distance completed, stroke rate and race position (Scott, Scott, Bedic, & Dowd, 1999). This strategy allows individuals to alter their movement pattern according to body awareness, racing strategy, and muscular tension (Tammen, 1996). Dissociation, on the other hand, is a cognitive strategy in which the performer focuses on external cues, such as daydreaming, admiring the view, and problem solving; thereby restricting the influence of sensory information from the body (Schomer, 1986). Both these techniques were utilised in the individual mentals skills training program to inprove concentration and Figure 1 presents the outcome of the individual peformance as a results of the implementation. It can be seen that both the physical and mental index in the individual data increased as the research task progressed. Psychological improvement was apparent and would have resulted from the asscociative technique practised as it would have cause the individual to focus upon the situation present instead of thinking of future tasks. ...read more.

It was thought that a improvement of concentration, through the implementation of asscociative and dissociated techniques, would result in an increase in both individual and team performance standard. As was justified above, this only occurred in the individual?s results which was then found to be unsubstantial in evidence due to a lack of measurable data to evaluate the physical performance. In future, the performance of each individual should be recorded for relevant data. The team?s results were found to be quite divergent from the hypothesis because of a lack of team coheasion, common goals, limited time to develop relationships, a large difference in skill level and experience and the use of a number of dissociative techniques, instead of associative. Future training and performance, however, will improve because of this investigation as students now realise the importance of psychology in sport and the effect it can have upon a team, whether it be posistive or negative. For investigations wishing to expand on the concepts explored during this research task, they may benefit from studying the comparison between he use of associative and dissociative techniques ofnYear 12 water polo players and their effect on performance. Another aspect to be examined could be how a mental skill training plan would affect the performance of elite athletes when compared to novices. These nivestigations would solidify the notion that ?Sports psychology attempts to optimise these three elements so that performers strive to succeed with the determination and belief that the body and abilities will produce the required performance.? (Kiss. M, et al. ...read more.