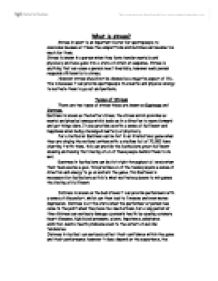 What is stress? Stress in sport is an important factor for sportspeople to overcome because at times the competitions and matches can become too much for them. Stress is known in a person when they form tension mentally and physically and have gone into a state of strain or suspense. Stress is anything that can cause a person react invariably, however each person responds differently to stress. However stress should not be deemed as a negative aspect of life, this is because it can provide sportspeople the mental and physical energy to motivate them to go out and perform. Types of Stress There are two types of stress these are known as Eustress and Distress. Eustress is known as the better stress, the stress which provides us mental and physical energy which leads us in a direction to move forward and get things done. It also provides us with a sense of fulfilment and happiness when being challenged mentally or physically. For a footballer Eustress can be felt in an international game when they are singing the national anthem with a stadium full of 70,000 fans chanting it with them, this can provide the footballers great fulfilment knowing and having that feeling of all of those people behind them to do well. Eustress in footballers can be felt right throughout all levels when their team scores a goal, this provides all of the teams players a sense of direction and energy to go on and win the game, this Eustress is necessary for footballers as this is what motivates players to win games the feeling of fulfilment. Distress is known as the bad stress it can provide performers with a sense of discomfort, which can then lead to illnesses and even worse depression. Distress is at the state when the performer or person has come to the point when they have too much stress, for a long period of time distress can seriously damage a person's health by causing coronary heart diseases, high blood pressure, ulcers, impotence, substance addiction, mental health problems even to the extent of suicidal tendencies. ...read more.

which is generating a stressful process, for an example an opponent which you know is better than you can be a stressful process for a sports performer because feelings of self-worth can decrease you begin to feel you are not good enough and you feel why bother if you know they are better than you. * Personal Factors: These causes of stress are related to the people we frequently share our lives with such as family, friends, partners, personal factors also include factors such as money, health and living accommodation. For a sports performer these personal factors could either be a death or a confrontation, these can have a severe affect upon sport performers especially if they depend on support from these close friends or family and if a stress occurs around them this will have a sudden impact upon their game and can sometimes result in the performer quitting due to the demand and stress it has on their surrounding close companions. * Occupational Factors: This is either the job, or studying we carry out, or for some people both these will include the people you work with or the team mates you are in a team with, and your relationship with coaches and managers. For sports performers this can be the most stressful cause of stress this is because it is deemed to be the most important thing to have a good relationship with your surrounding team mates and coaches as you depend on these to perform well, and it can be stressful for a sports performer when they change clubs or if they generally cannot click with their team mates and this could cause their confidence to decrease making their performance lacking in enthusiasm making it appear from the coaches point of view that they do not want to play. This can be very stressful for the performer because they just want to concentrate on their game however they can't do this if they are unable to bond with their team mates and work well with them. ...read more.

For a sports performer certain performers cannot perform to their best possible ability if their arousal levels are high, whereas some performers need their arousal levels to be higher than normal to provide them a burst of energy and motivation. Inverted U hypothesis This theory was derived from Yerkes and Dodson Law, it's theory is based around denying the Drive theory however the Inverted U hypothesis approves that arousal does have a positive impact upon performance but only to a certain extent, because the Inverted U hypothesis theory derives that past a certain point of arousal the performance levels can falter and decline. The optimal point is where the arousal levels are at the best point to provide a peak performance and is often known as the "Zone" because in this point of arousal everything runs smoothly and goes well. For sports performer's this type of theory can be affective especially at a top level because their arousal levels need to be at the perfect point to ensure they are not under aroused so that they have no enthusiasm to perform, and if they are over aroused they can become too aggressive and loose composure within their performance. The only fault in this theory is that every optimum point can vary for different individuals it all depends on their personality and how certain situations can affect them. Catastrophe Theory The catastrophe theory was developed by Yuri Hanin who discovered that individual sports performers have their own level of state anxiety which enables them to still perform effectively and produces their best performance, performers find that if they are not within their "zone" they will not perform to their optimum however each individual needs to discover their optimum functioning zone to produce their best performance. IZOF theory This theory was based around the catastrophe theory it is known as the Individual Zone of Optimal Functioning training, this theory allows performers to find their level of state anxiety which is most comfortable for them. ...read more.