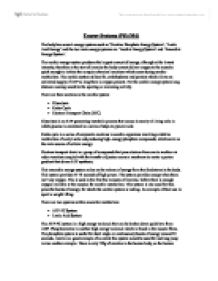 Energy Systems (P8) (M6) The body has several energy systems such as 'Creatine Phosphate Energy System', 'Lactic Acid Energy' and the two main energy systems are 'Aerobic Energy System' and 'Anaerobic Energy System'. The aerobic energy system produces the largest amount of energy, although at the lowest intensity, therefore at the start of exercise the body cannot deliver oxygen to the muscles quick enough to initiate the complex chemical reactions which occur during aerobic metabolism. The aerobic system utilises fat, carbohydrates and proteins which allows an unlimited supply of ATP as long there is oxygen present. For the aerobic energy system long distance running would be the sporting or exercising activity. ...read more.

Electron transport chain is a group of compounds that pass electron from one to another via redox reactions coupled with the transfer of proton across a membrane to create a proton gradient that drives ATP synthesis. This anaerobic energy system relies on the release of energy from the food stores in the body. This system provides 45-70 seconds of high power. The system provides energy when there isn't any oxygen. This is used in the first few minutes of exercise, before there is enough oxygen available at the muscles for aerobic metabolism. This system is also used for fast, powerful bursts of energy, for which the aerobic system is lacking. ...read more.

There is only 120g of creatine in the human body, so the human body will have to breakdown PC so that it can produce energy to resynthesise ATP. This is temporary and can only last approximately 10 seconds. Therefore the ATP-PC system is used mainly for short bursts. The lactic acid system is also known as anaerobic glycolysis because the process is the same as aerobic glycolysis only this is used without oxygen. To prevent an increase in acidity the pyruvic acid lets the hydrogen form lactic acid. If oxygen was present the hydrogen would be transported to the mitochondria for use in the kerbs cycle. Lactic acid provides energy for a long duration, between 10-90 seconds this would be required for an 800m run or a 100m swim. ...read more.

This assignment would gain the merit criteria, but could be refined to reflect the accurate theory associated with the energy systems.
Examples of each system are given and a good attempt to differentiate between each system's process and role.

4 stars for a BTEC course.