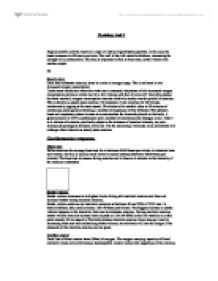 The body's response to exercise- Regular aerobic activity results in a type of cardiac hypertrophy (growth). In this case the heart increases in efficiency and size. The wall of the left ventricle thickens, increasing the strength of its contractions. Thi

Physiology task 2 Regular aerobic activity results in a type of cardiac hypertrophy (growth). In this case the heart increases in efficiency and size. The wall of the left ventricle thickens, increasing the strength of its contractions. This has an important effect on heart rate, stroke volume and cardiac output. P3 Steady state Once you undertake exercise, there is a raise in energy usage. This is reflected in the increased oxygen consumption. Under some conditions where the work rate is constant, the pattern of this increased oxygen consumption shows an initial rise for a few minutes and then it levels off. Once this plateau has been reached, oxygen consumption remains relatively steady over the period of exercise. This is known as steady state exercise. For example, if you exercise for 20 minutes continuously jogging at the same speed, 20 minutes of an aerobic class or 20 minutes of continuous same speed swimming, a number of responses will be different. The athlete's heart and respiratory states increase to accommodate the demands placed on the body. A grater amount of ATP is synthesised and a number of neuromuscular changes occur. After 3 or 4 minutes of exercise your body adapts to the increase of exercise intensity, so your increase physiological demands levels out. For the remaining 15minutes or so, the athlete will undergo what is known as steady state exercise. Cardiovascular responses Heart rate Before exercise the average heart rate for is between 60-80 beats per minute in untrained men and women, but this is usually much lower in trained athletes (between 40-60 beats per minute). The heart rate increases during exercise and it does so in relation to the intensity of the exercise undertaken. Stroke volume Stroke volume increases to its highest levels during sub maximal exercise and does not increase further during maximal exercise. Stroke volume achieves its maximum amounts at between 40 and 50% of VO2 max. ...read more.

The contribution of each energy system is dependent on the intensity and duration of the exercise. The continuous interaction of the three systems is known as the energy continuum. Adenosine triphosphate (ATP) In general, in order to enhance your body ATP production and ATP energy transfer capacity requires repetitive, intense, short duration exercise. The training activities chosen should engage the muscles in the movement of which the athlete desires improved anaerobic power. An athlete wishing to improve on their speed and power would undertake sprint training and weight training. This achieves two goals: * It enhances the metabolic capacity of working muscle tissue fibres * It improves the neuromuscular adaptations to the specific movement required for a sport When ATP is split, some of the energy is used to power muscle contractions, but as no energy is 100% efficient, some is always lost through heat. This is why vigorous exercise produces large amounts of heat that must escape from the body. Anaerobic glycolysis Anaerobic glycolysis involves the breakdown of glycogen in the absence of oxygen, with the formation of ATP plus lactate (lactic acid). The accumulation of lactic acid stops the use of this energy system after 40-60seconds of maximum effort. This means it is the system called upon by athletes whose sports demand high-energy expenditure for up to 60seconds, such as 400metre runners and those in compound sprint sports such as rugby and squash. Aerobic energy system This aerobic energy system involves the oxygen transporting system and the use of mitochondria in the working muscle for oxidation of glycogen and fatty acids. Due to this systems reliance on oxygen, it is called the aerobic energy system. This system is involved in prolonged work at low intensity and is of increasing importance the longer the sport goes on. Only the lack of fuel, overheating or dehydration will end exercise using this system. The system for burning fuel in aerobic exercise varies according to the duration and intensity of the exercise. ...read more.

Oxygen consumption after exercise restores the energy demands used during exercise. Fast components Restoration of muscle phosphogen stores Alactacid oxygen debt (without lactic acid) represents that portion of oxygen used to synthesise and restore muscle phosphogen stores, which have been almost been completely exhausted during high intensity exercise. During the first three minutes of recovery, EPOC restores almost 99% of the ATP and creatine phosphate used during exercise. Recovery time (secs) Muscle phosphogen 10 10 30 50 60 75 90 87 120 93 150 97 180 99 210 101 240 102 Slow components Removal of lactic acid The slow component of EPOC is concerned with the removal of lactic acid from the muscles and the blood. This can take several hours, depending on the intensity of the exercise and whether the athlete was active or passive during the recovery period (continuous activity can significantly speed up recovery). Around half of lactic acid is removed after 15minutes, and most is removed after an hour. Lactacid recovery converts most of the lactic acid to pyretic acid, which is oxidised via the Krebs cycle to create ATP. Once exercise is over, the live synthesises lactic acid into glycogen while the rest of the body can remove small amounts of lactic acid through respiration, perspiration and excretion. Replenishment of myoglobin Myoglobin is an oxygen storage protein found in muscle. Like haemogloin, it forms a loose combination with oxygen while the oxygen supply is plentiful, and stores it until the demand for oxygen increases. Muscle has its own build in oxygen supply. However, during exercise, the oxygen from myoglobin is quickly used up. After exercise, additional oxygen is required to pay back any oxygen that has been borrowed from myoglobin stores. Replacement of glycogen The replenishment of muscle and liver glycogen stores depends on the type of exercise. Short distance, high intensity exercise may take two or three hours, whereas long endurance activities such as marathon running, may take days. Replenishment of glycogen stores is most rapid during the first few hours after training. Complete restoration of glycogen stores is speeded up with a high carbohydrate diet. ...read more.