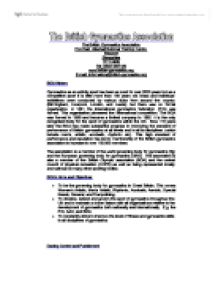 The British Gymnastics Association Ford hall, Lilleshall National Training Centre Newport Shropshire TF10 9NB Tel: 08451297129 www.british-gymnastics.org E-mail: [email protected] BGA History Gymnastics as an activity sport has been around for over 2000 years but as a competitive sport it is little more than 100 years old. Mass and individual exhibitions were conducted by various clubs from around the country (Birmingham, Liverpool, London, and Leeds) but there was no formal organisation. In 1881 the international gymnastics federation (FIG) was formed. This organisation pioneered the international competition. The BGA was formed in 1888 and became a limited company in 1982. It is the only recognised body for the sport of gymnastics within the UK. Now 116 years later the BGA has made substantial progress in improving the standard of performance of British gymnastics at all levels and in all its disciplines (which include men's, artistic, acrobatic, rhythmic etc). This high standard of performance and reputation has led to membership of the British gymnastics association to increase to over 100,000 members. The association is a member of the world governing body for gymnastics (fig) and the European governing body for gymnastics (UEG). The association is also a member of the British Olympic association (BOA) and the central council of physical recreation (CCPR) as well as being represented locally and national on many other sporting bodies. ...read more.

To progress beyond this level I had to get involved with my school's extra curricular club. To do this I would need a higher level of commitment to the sport as I would have to attend the club regularly, this takes the spontaneity out of the game making it more organised. This would take me to the second level of the performance pyramid which is schools. Performance Pyramid Cont' To progress further I would have to join a local amateur club in my area and start attending their training sessions and competitions. As I progress further up the pyramid I will need to keep a growing interest and passion in the sport as well as commitment to continue attending each week. To progress to the next level I would need to be improving my skills through training constantly. This is the first time it is my skills and Performance which are needed to make the movement to the next level and not me. I will have to be seen by local development officers and begin to win competitions to move on up the performance pyramid. Once I have been recognised for my abilities and accepted on to the Talent Development Programme I will have to begin attending the TDP training camps as well as my regular training to ensure that I continue to improve my skills. ...read more.

Then the performer lifts the legs approx 10 cm above the floor and holds for 10 seconds. Once the performer can hold the position easily for 10 seconds increase the time gradually by 10 seconds a go until the gymnast can hold the position for a minute. Now increase the difficulty by adding ankle weights, gradually build up the difficulty and time held for as before. This practice will increase the strength of the performer making it easier for them to complete the skill as a whole. Sub Routine Practice Two; 2) The next progression for this skill would be to elephant lift against a wall. This is when the gymnast stands with their legs very wide facing a wall, bends down and levers themselves up to handstand using the wall as support. This increases the strength of the performer and builds up their experience of a straddle up (as this is a very similar exercise it is a good skill for comparison). I would do this with additional support from the coach to begin with but as the performer becomes stronger with less and less support to increase the difficulty. Once this exercise can be done easily without assistance the difficulty can be increased again by adding ankle weights. Acquisition of Skill Cont' Sub Routine Practice Three: 3) I would now have the performer attempt a straddle up on the blocks, firstly with support to build the gymnasts confidence and then gradually increase the difficulty by providing less and less support until this skill is done independently. ...read more.