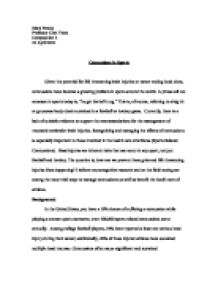 The Dangers of Concussions in US Sports

Mark Fetsko Professor Cian Yates Composition 2 22 April 2011 Concussions in Sports Given the potential for life threatening brain injuries or career ending head shots, concussions have become a growing problem in sports around the world. A phrase all too common in sports today is, "he got his bell rung." This is, of course, referring to a big hit or gruesome body check sustained in a football or hockey game. Currently, there is a lack of suitable evidence to support the recommendations for the management of traumatic cerebralor brain injuries. Recognizing and managing the effects of concussions is especially important to those involved in the health care of athletes (Sports Related Concussions). Head injuries are inherent risks that can occur in any sport, not just football and hockey. The question is, how can we prevent these grim and life threatening injuries from happening? I believe neurocognitive research and on the field testing are among the most vital ways to manage concussions as well as benefit the health care of athletes. Background: In the United States, you have a 19% chance of suffering a concussion while playing a contact sport; moreover, over 300,000 sports related concussions occur annually. ...read more.

The National Athletic Trainers' Association suggests a checklist such as, the Graded Symptom Checklist, should be used when evaluatinga head injury. By checking off symptoms and watching the athlete over a period of 72 hours, you can greatly reduce any chance of reoccurrence. Another suggested method of evaluation is the Standardized Assessment of Concussion Exam; this test utilizes four graded sections, which include: orientation, immediate memory, concentration, and delayed recall. This 30 point test can be completed in about five minutes and is easily given right on the side line during a game. Another test, the Balance Error Scoring System, can easily be performed by a trainer of coach. The athlete stands in three different positions and is timed for 20 seconds each; ultimately, the less coordination the player shows, the higher the risk of a concussion is evident (kch.illinois.edu). How do Concussions occur? Concussions can happen in any sport, at any time. They can occur during drills in practice, as well as in games. In fact, injuries during practice can be just as serious as those that happen during a game. Although more prevalent in contact sports, they may result from a fall, or when a moving object strikes a person's head. A blow that twists the head is more likely to result in loss of consciousness (Familydoctor.org). ...read more.

N.F.L. player, Andre Waters committed suicide in November 2004, and an explanation for his death has remainedunknown for years. He left a suicide note stating he would like to leave his brain for science to further study the effects of concussions. A Pittsburgh neuropathologist, Dr. Bennet Omaluh, was given permission to perform such tests. The doctor concluded that Mr. Waters had sustained brain damage from playing football, and said this led to his depression and death. The doctor determined that Mr. Waters's brain tissue had degenerated into that of an 85 year-old man with similar characteristics as those of early stage Alzheimer's victims. Dr. Omalu said he believed that the damage was caused by successive concussions (neurosurgery.pitt.edu). I believe there needs to be congressional help in combating this difficult issue of athletic concussions. Wearing a good quality helmet, a mouthpiece, and strengthening the neck muscles can help prevent concussions; however, much responsibility lies on the doctors, coaches, and surrounding medical staff. Also, although athletes may be eager to return to play, they need to be honest with the examiner, telling him or her exactly how they feel (EHow.com). On the field baseline neurocognitive test may be our best hope for the time being, that is, until more research on concussions and the equipment player's use can be conducted. ...read more.