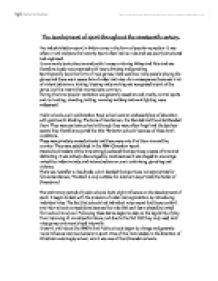 The development of sport throughout the nineteenth century.

The development of sport throughout the nineteenth century. Pre-industrialisation sport in Britain came in the form of popular recreation. It was often a rural and parochial activity. Sport often had no rules and was poorly structured and organised. It commonly took place around public houses or during Wakes and Fairs and was therefore closely accompanied with heavy drinking and gambling. Sport typically took the form of mob games; there were too many people playing the games and there was a severe lack of order and rules. As a consequence there was a lot of violent behaviour; kicking, tripping and punching was recognised as part of the game, but this meant that injuries were common. During this time popular recreation was generally based around cruelty; animal sports such as hunting, shooting, baiting, coursing and dog and c**k fighting, were widespread. Public schools; such as Clarendon Boys' school were an endowed place of education with great social standing. The Sons of Gentlemen, the talented and the elite attended them. They were exclusive schools although they were often frugal and the teachers severe; they therefore acquired the title "Barbarian schools" because of these harsh conditions. ...read more.

It wasn't until about the 1840's that Public schools began to change and generate more influence and involvement in sport. One of the main leaders in the direction of athleticism was Rugby school, which was one of the Clarendon schools. The Head there Thomas Arnold can be remembered as one of a number of Headmasters who established an environment that eventually stimulated athleticism. Arnold endeavoured to create social control and moral reform through sport. It was important to him to create Christian Gentlemen; form a "manly piety". It was believed that he used sport as he thought it was morally good although it can be argued that it was due to his love for sport as Wymer (1953) suggested that Arnold did in fact have a love for several sports; such as cricket, mountain-walking, swimming, sailing, shooting, and riding. However it is clear that the original sporting enthusiasm came entirely from the boy's. Arnold's astute nature sensed their enthusiasm and thus acted upon it to achieve moral and social reforms. Sport became a useful social feature, in later schools one of the main objectives of the Housemaster was to ensure that the boys were beneficially occupied; this was often done by arranging sporting competitions. ...read more.

They carried it in to the "Muscular Christian" era. The introduction of new schools and the expansion of existing schools led to an immense project; the building of new sporting facilities including gymnasiums and extensive playing fields. The structure of the school day was also altered. The morning consisted of academic studies, the afternoon was sporting activities and the evening was prep and house activities. Public school athleticism has had an enormous influence on the maturity of sport through history. Sport was brought on substantially in the course of the last 20 years or so of the 1800's. The time spent on playing sport could be up to five hours a day and it was coached by professionals and elite individuals. This inevitably created a widespread model of play that caused the standard of amateur sport to reach levels it had never seen before. Sport became an essential part of education meaning that its importance was vast. People respected, valued and enjoyed sport. The physical endeavour and moral integrity that sport carried with it become a crucial part of life. The concept of athleticism created not only a new standard of physical ability and sporting performance but also a new model of Gentlemen with superior moral values and social control. ...read more.