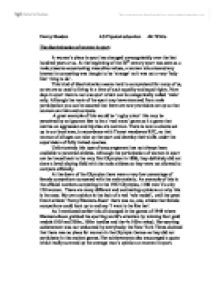 The discrimination of women in sport.

Danny Meaden AS Physical education -Mr White The discrimination of women in sport: A woman's place in sport has changed unrecognisably over the last hundred years or so. At the beginning of the 20th century sport was seen as a male preserve accentuating masculine values, a woman who showed any interest in competing was thought to be 'strange' as it was not a very 'lady like' thing to do'. This kind of discrimination seems hard to comprehend for many of us, as we are so used to living in a time of such equality and equal rights. Now days in sport there is not one sport which can be categorically called 'male' only. Although the roots of the sport may have stemmed from male participation you can be assured that there are now provisions set up so that women can train and compete. A great example of this would be 'rugby union' this may be perceived by an ignorant few to be a 'real mans' game as it a game that centres on aggression and injuries are common. ...read more.

After reading the fascinating article entitled "Knickers off Girls, the Olympians are coming" by the author Andrew Jennings, I feel disgusted in the way which women were treated. If a woman had performed exceptionally well them there seemed to be subject to a so called gender 'test'. At first this test was not at all scientific. This is a quote from a woman describing her ordeal; 'The doctors then proceeded to undertake an examination which, in modern parlance, amounted to a grope. Presumably they were searching for hidden testes. They found nothing and I left' This may seem a very basic way of testing gender, and I would agree, but it seems to be better than some of there more modern ways. The thought of having to undergo these tests or even worst being wrongly accused of being a man seriously put women of competing. I do not blame the women for not wanting to undergo these tests, because imagine if a 'woman' failed this test and then the result was announced to the world press which would then pass the results to an estimated two billion people. ...read more.

This type of media perception must be very off-putting for potential tennis stars of the future as they may feel that it will not matter how well they do in tournaments they will not receive the media attention they deserve because they are not stunningly attractive. Even worse would be for the woman to be looked at and branded as a 'lesbo' just because of there muscular appearance, which has happened to such players as 'Lindsay Davenport' I think that I have worked out the reason for these physical stereotypes. I am sure that the sports sections in such things a tabloid papers are aimed at the male reader, so they are looking to cash in on what men like ie. Pretty women, such as Kournikova. This 'Beauty Vs Talent' struggle will continue in women's sport until it reaches the stage where there are equal amounts of men and women participating and watching sport, then more emphasis will be put on the result and looks will take a definite second place. ...read more.