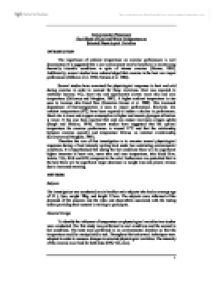 The Effects of Cool and Warm Temperature on Selected Physiological Variables.

Environmental Physiology The Effects of Cool and Warm Temperature on Selected Physiological Variables INTRODUCTION The importance of ambient temperature on exercise performance is well documented. It is suggested that a cool environment may be beneficial in maintaining thermally tolerable conditions in spite of intense exercise (Werner, 1993). Additionally, several studies have acknowledged that exercise in the heat can impair performance (Febbraio et al. 1994; Nielsen et al. 1984). Several studies have examined the physiological responses to heat and cold during exercise in order to account for these variations. Heat was reported to markedly increase VO2, heart rate and significantly elevate mean skin and core temperature (Galloway and Maughan, 1997). A higher ambient temperature is also seen to increase skin blood flow (Gonzalez-Alonso et al. 1999). This increased dependence of thermoregulation is seen to impair performance. Similarly, low ambient temperatures (0oC) have been reported to induce a decline in performance. Heart rate is lower and oxygen consumption is higher and muscle glycogen utilisation is lower. It has also been reported that cold can reduce maximum oxygen uptake (Bergh and Ekblom, 1979). Recent studies have suggested that the optimal temperature for exercise performance is around 11oC and that the relationship between exercise capacity and temperature follows an inverted U-relationship (Galloway and Maughan, 1997). Therefore the aim of this investigation is to examine several physiological responses during a fixed intensity cycling bout under two contrasting environmental conditions. It is hypothesised that during the hot conditions there will be significant higher increases in heart rate, mean skin and core temperature, skin blood flow, lactate, VO2, RER and RPE compared to the cold. Furthermore we postulated that in the heat there will be significant larger decreases in weight loss and plasma volume due to increased sweating. METHODS Subjects The investigation was conducted on six healthy male subjects who had an average age of 22 + 2yrs, weight 78kg, and height 175cm. ...read more.

They found that changes in the measures were consistent with a significant reduction in plasma volume during exercise in the heat. This increased loss in the heat is due to increase amounts of sweating and fluid shifts. VO2. The literature in the area of VO2 is inconsistent and several studies have found conflicting results. The results from this investigation seem to show that VO2 was lower in the cold conditions compared to the hot. The results are supported by Fink et al. (1975) who observed a higher VO2 in the heat (41oC) compared to a cold environment (9oC). However, Galloway and Maughan (1997) found that VO2 was lower in the hot (31oC) trial compared to cooler tests and suggested that these variances in studies may be related to factors such as intensity, protocol that influence oxygen cost of exercise. Weight Loss. The data generated in this study show that weight loss occurred under both conditions. This weight loss was down to water loss via sweating and therefore because the subjects sweated more in the hotter environment they consequently had a greater weight loss than when the test was performed in the cold. This variable shows a close correlation to plasma volume responses described above. CONCLUSION The results generated in the above study and current literature suggest that performance is favoured in the cold conditions. It has been highlighted that an increased core temperature is a major limiting factor during exercise (Gonzalez-Alonso et al. 1999). Furthermore it is evident that the increased stress placed upon the body in order to regulate the body's temperature impairs mechanisms needed for optimal performance. Skin blood flow was increased dramatically, which impaired O2 delivery to the working muscles and consequently increased lactate concentration. However no strong conclusions can be made on temperatures effect on performance because a major limitation of this study was that no performance criteria were performed. Therefore if the investigation was to be repeated then it must be ensured that a time to exhaustion and/or distance covered measurement be taken so that this area can be concluded properly. ...read more.