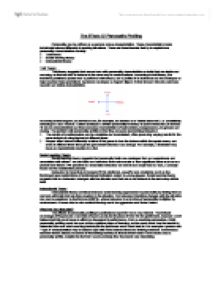 The effects of personality profiling

The Effects Of Personality Profiling Personality can be defined as a persons unique characteristics. These characteristics make individuals behave differently in sporting situations. There are three theories that try to explain how personality characteristics develop: * Trait theory * Social learning theory * Interactionist theory Trait Theory Trait theory suggests that we are born with personality characteristics or traits that are stable and enduring, so that we tend to behave in the same way in most situations. According to trait theory, it is therefore possible to predict how a performer will behave, and a profile of an individual can be developed to help coaches make predictions. Eyesenck developed a diagram (figure 1) ...read more.

* Players often behave differently outside of the game to how the behave within the sports arena, and even at different times through the game their behaviour can change. For example, a footballer may have an unpredictable reaction to a foul. Social Learning Theory Social learning theory suggests that personality traits are developed from our experiences and association with others - we can learn our behaviour from role models or from significant other such as our parents and friends. WE perceive our associates behaviour as normal and adopt it as our own, a concept known as the socialisation process. Behaviour is more likely to be learnt if it is reinforced, powerful and consistent, such as the flamboyant goal celebrations of professional footballers copied by young players. ...read more.

What Are Your thoughts? The effects of personality profiling in professional sport for me is very minimal. The furthest advantage of the process I can think of would purely be for piece of mind for the performers, however I don't believe that this could have an effect on the person's performance. From a coaching perspective, I think personality profiling could be used at the cognitive phase of learning, as the coach could use the results to determine how and what coaching techniques the performer would react best to. For example a person with "Type A" characteristics may be able to cope with more intense strenuous training sessions. Autonomous learners should already be aware of the training techniques that suit them best. I have never done a personality profile, despite the fact that I would probably find the results very interesting. ?? ?? ?? ?? ...read more.