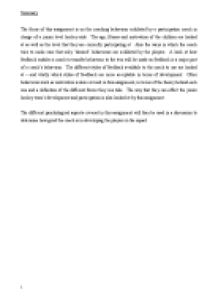 The focus of this assignment is on the coaching behaviour exhibited by a participation coach in charge of a junior level hockey side.

﻿Summary The focus of this assignment is on the coaching behaviour exhibited by a participation coach in charge of a junior level hockey side. The age, fitness and motivation of the children are looked at as well as the level that they are currently participating at. Also the ways in which the coach tries to make sure that only ?desired? behaviours are exhibited by the players. A look at how feedback enables a coach to transfer behaviour to the tem will be made as feedback is a major part of a coach?s behaviour. The different styles of feedback available to the coach to use are looked at ? and vitally which styles of feedback are more acceptable in terms of development. Other behaviours such as motivation is also covered in this assignment, in terms of the theory behind each one and a definition of the different forms they can take. The way that they can affect the junior hockey team?s development and participation is also looked at by this assignment. The different psychological aspects covered in this assignment will then be used in a discussion to determine how good the coach is in developing the players in the squad. 1. Introduction It is very important to realise when involved with coaching children that they are very different from adults both physiologically and emotionally. For instance, children are more likely to participate in the sport for the intrinsic rewards such as enjoyment of the game or the fun of the social aspect of it, while adults tend to play sport for extrinsic rewards such as money and trophies. When coaches try to transfer their behaviour onto the young athletes by promoting extrinsic rewards above the ?fun? aspect of sport it can lead to problems and reduce the number of people willing to play because you are removing their initial attraction to sport. This is supported by Kenyon and Mcpherson (1973), who suggested that coaches (as role models) ...read more.

The coach in this assignment praises performances he deems desirable and so motivates the performers to replicate this behaviour in front of him, by his use of feedback. It is important to distinguish the coach as a participation coach, in contrast to a performance coach (Cross & Lyle, 2001) as regards to this assignment. This means that he is more concerned in the player?s participation and enjoyment rather than with the results achieved by the team. This is important as it can have severe consequences in terms of the feedback provided to the players, the participation level of the players and in turn the level of motivation that each player has. Because the coach?s main focus is on maintaining the player?s level of participation and so putting a greater emphasis on fun in order to attract new players, his system of coaching will fit more acceptably into the participation aspect of coaching and not the performance aspect, which is predominantly focussed on success at all level, achieving goals and gaining any extrinsic rewards possible. Feedback has many different aspects, which can all have varying implications on the behaviours transferred to the players by the coach. The following definitions are adapted from Honeybourne et al, (1996). 3.1 Positive Feedback and Reward Positive feedback is where the coach will praise athletes for working hard and playing to the best of their ability. If a player makes a mistake than the coach will not say a word and the player will know they have done wrong. Rewards can take many forms such as simply praise from the coach ranging right through to money and trophies for winning e.g., player of the month award. However reward can also involve being let of a punishment for instance not having to do press-ups if you made a mistake (missed-placed pass) because you only did it once. 3.2 Negative Feedback and Punishment Negative feedback is where the coach will make a comment if you make a mistake but not if you do something well i.e. ...read more.

This in turn means that the coach would have to adapt and develop more of a performance coaching basis, rather than being a participation coach, which according to Cross & Lyle (2001) are two completely separate entities with no similarity between them at all. However this is a couple of years away and so does not need to be covered in this discussion. In order to help stimulate his players into improving the feedback used by the coach in a match situation was mainly positive (supported by Wandzilak & Ansorge) ? this is mainly due to the fact that instructions to the players would have been detrimental to the enjoyment of the players on match day. Another reason for this is because immature minds find it difficult to focus on more than a limited number of things at a time and providing them with a number of different instructions would ultimately cause confusion for the players. Positive feedback was an easy way for the coach to help override this confusion, with a simple Stimulus ? Response effect taking place. This effect occurs on an almost subliminal level. Another way in which the coach could try to maintain the player?s motivation would be to set them goals. This could create a sense of excitement in the team because the players would feel more wanted due to the fact that each goal is individual. To make this work though the goals set would have to be enjoyable and achievable by that child. Also the more technical aspects of the drills could be satisfied if the coach uses positive rather than negative feedback, although this does go against the findings of Wandzilak & Ansorge (1988). The main thing that the coach has to be aware of throughout though is that he is letting the children have fun and not try to coach them as if they are adults. ...read more.