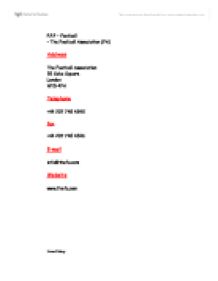 P.P.P - Football - The Football Association (FA) Address The Football Association 25 Soho Square London W1D 4FA Telephone +44 207 745 4545 Fax +44 207 745 4546 E-mail [email protected] Website www.thefa.com P.P.P - Football - The Football Association (FA) The Regional Structure The game is controlled at the local level, by 43 County FA's affiliated to The Football Association but with responsibilities for organising and running football activities in their area. A hierarchy of leagues operates throughout the game, each taking responsibility for the administration of their own activities, such as membership, fixtures and registrations. Disciplinary matters (cautions, sending offs and misconduct) are controlled by The FA for the six top leagues (The FA Premier League, Football Leagues, Football Conference and the three Conference feeder leagues), with County FA's taking this responsibility at lower levels. P.P.P - Football - The Football Association (FA) FA Coaching Association (FACA) The FA Coaches Association (FACA) benefits package is changing with more focus towards constant access to online content, fully streamed audio interviews with the games best managers and more regular updates to name just a few of the improvements available from 1st September. What do I get if I join FACA? You will receive an FA Coaches Association membership card and a civil liability insurance certificate amongst a host of new and exciting benefits available from the 1st September. Two issues a year of Insight The world-renowned journal of The FA Coaches Association. Includes a review of sports science research, in-depth features, interviews with guest coach and tips on learning methods and coaching styles, nutrition, fitness training, child development. Plus news of conferences, courses, seminars, workshops and study visits. Access to Online Coaching Resource - Insight Live Available from the 1st September, Insight Live will provide all members with access to hundreds of archived articles from previous editions of Insight, online audio interviews with some of the country's best known managers and coaches, articles from experts around the world on all aspects of the game, competitions, discussion forums and much more... ...read more.

Two players are selected from each Club at random during the half time interval. * After the game, the players are directed to a sample collection area (room with toilet facilities). The sample collection procedure is explained to the players and carried out in accordance with the drug testing guidelines. * The Sampling Officer(s) will collect the urine samples and organise the despatch of these samples to the IOC accredited laboratory for analysis. The results of the comprehensive analysis of samples are forwarded to the Administrator of the FA Doping Control Programme privately and confidentially. * In the case of a positive find, a separate procedure is put into action. The FA Chief Executive, The Professional Footballers Association (Union) and the FA Compliance Department are informed of the find. * If a player's positive find is for performance enhancing drugs, it is highly likely that he will be charged with misconduct for bringing the game into disrepute and would appear before an FA Disciplinary Commission. * If the player's positive find is for any prohibited substance, The FA would seek an interview with the player. Depending on the outcome of the interview the... P.P.P - Football -The Football Association (FA) ...player may be charged with misconduct and ordered to appear before an FA Disciplinary Commission. The FA Disciplinary Commission may take one or more of the following actions: - - No action is to be taken - A warning as to future conduct - Punitive sanctions against the player (ban) - Request a clinical assessment of the player Decide that the player will receive: - - Counselling - Treatment - And/or rehabilitation for the condition - Probationary target testing following treatment or rehabilitation (if required). Results of the FA Doping Control Programme SEASON TESTS CONDUCTED SIGNIFICANT POSITIVE FINDS 1994 / 1995 272 12 1995 / 1996 272 7 1996 / 1997 500 5 1997 / 1998 500 3 1998 / 1999 546 2 1999 / 2000 1016 5 2000 / 2001 1034 6 2001 / 2002 1107 7 2002 / 2003 1201 8 Liam Illsley ...read more.