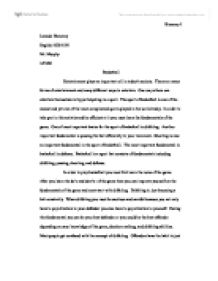 The fundamentals of Basketball

and try to force you to make a bad pass or lob the ball to where another defender can intercept the ball. When this happens then the offender is faced with a decision. His decision is to call a timeout or if he is an experience player and used to being trapped the he can step between the two defenders and find an easy target. The other teammates also have a responsibility which is that they must try to become a target and give their teammate options to get the ball off. Passing is made to shift the defense around so the offense can create a play so they could get off a good uncontested shot. The main objective of the offense is to hurt the defense and the only way that they could complete that task is by scoring points. In order to do this they must complete one of three things. The offense must either make a lay up, make a free throw, or they must make a jump shot. Shooting is an important fundamental in basketball because that is how you hurt the other team is by putting points on the score board. ...read more.

The coaches also have to work on their post players with position in the post position and playing tough and strong. Another form of defense that is extremely affective and hurts the other team is taking a charge. A charge is when the defensive player has position and the offensive player tries to make a strong move to the basket and runs over the defensive player and pushes him or her down. Accepting or taking a charge not only gives your team the ball but it also gives the other team a foul at the same time. Different coaches have different techniques for defense depending on what they see their team needs to improve on. To learn the sport of basketball you must learn the fundamentals. After you learn the fundamentals you must be efficient in using with you learn in different situations and you must also know your role in the game. The fundamentals of basketball are dribbling, passing, shooting, and defense. If a player is well experience with the fundamentals of the sport then they have a greater chance in going on to a higher level of the sport such as collage or professional. ?? ?? ?? ?? Bienemy 1 ...read more.