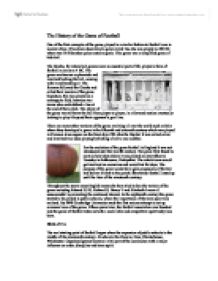 The Greeks were playing football 2,000 years ago

The History of the Game of Football One of the first examples of the game, played in a similar fashion to football was in ancient china. It has been discovered a game called Tsu chu was played in 200 BC where two 30 ft bamboo poles acted as goals. This game was a simplified game of kick ball. The Greeks, for whom ball games were an essential part of life, played a form of football as early as 4 BC. The game was known as pheninda and involved kicking the ball, running with it and handling it. The Romans followed the Greeks and called their version of the game hapastum, this was played on a rectangular field, between two teams who each defend a line at the end of their pitch. The object of the game was to throw the ball from player to player, in a forward motion eventually looking to play it beyond their opponent's goal line. There are many other versions of the game evolving all over the world such as Italy where they developed a game in the fifteenth and sixteenth century which was played in Florence town square on the feast day of St John the Baptist. It was called calico and involved two sides playing by kicking a ball to one another. For the evolution of the game football in England it was not introduced until the twelfth century. The game first found its roots in holy days where it was played on every Shrove Tuesday in Ashbourne, Derbyshire. The whole town would get involved on occasions and would last for days. The purpose of the game would be to gain possession of the ball and deliver it back to the parish. Shrovetide football lasted up until the later of the nineteenth century. Throughout the years many English monarchs have tried to ban the version of the game including Edward II, III, Richard II, Henry V and Elizabeth I were all unsuccessful in preventing the continued interest. ...read more.

block tackle * The sliding tackle All of these tackles have their own situations in which they are to be used and can gain the best results. Some of these tackles are more delicate than others and must be performed with precise precision so that a foul or procession is not given. Front block tackle This tackle occurs when both the defender and attacker meet head on and both go to take procession of the ball at the same time square on to one another. Both players must attack the ball with the inside of their foot so that the tackle can be performed correctly and safely. For the defender to be successful he needs to transfer their weight quickly both from their back foot forwards onto their front foot so that there is both more power and weight being put into the tackle increasing their chances of winning the challenge. Coaching Tips * Keep eye on ball. * Upper body weight forward. * Coordinate body movement. * Apply maximum force, aiming to block the ball, rather than kick it. Ground block tackle This tackle is basically used when a sliding tackle would not be affective. The tackle is performed by the defender placing their body on the floor in front of the ball so that the attacker can't get the ball past. The best technique for this tackle is for the defender to accelerate into the tackle dropping their hips so that they drop quickly to the floor. When the drop their contact leg should be slightly flexed and as tense a possible. Their body weight should pivot forward as contact as made this will provide maximum power and strength. The contact leg should pivot on the ground when contact is made so that he can use the speed of the tackle to spring back up off the ground regain balance and gain possession This tackle should only be used as a last resort as it is very physical and has high risk of injury. ...read more.