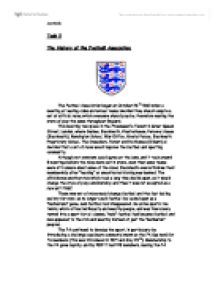 The History of the Football Association.

Task 2 The History of the Football Association The Football Association began on October 26th 1863 when a meeting of leading clubs and school teams decided they should compile a set of official rules, which everyone should play by; therefore making the state of play the same throughout England. This meeting took place in the Freemason's Tavern in Great Queen Street, London, where Barnes, Blackheath, Charterhouse, Perceval House (Blackheath), Kensington School, War Office, Crystal Palace, Blackheath Proprietary School, The Crusaders, Forest and No Names (Kilburn) all decided that a set of rules would improve the football and sporting community. Although not everyone could agree on the laws, and it took around 5 meetings before the rules were set in stone, even then some teams were still unsure about some of the rules; Blackheath even withdrew their membership after "hacking" or uncontrolled kicking was banned. ...read more.

So unlike sports like tennis, which attracted Royalty and wealthy people, and was then slowly turned into a sport for all classes, "mob" football had become football and now appealed to the rich and wealthy instead of just the "barbarian" peoples. The FA continued to develop the sport, in particularly by introducing a challenge cup (more commonly known as the FA Cup now) for its members (this was introduced in 1871 and July 20th). Membership to the FA grew rapidly, and by 1881 it had 128 members, making the FA Challenge Cup the most prestigious and oldest competition of its time. The FA was becoming bigger and bigger as society was becoming more civilized, as they wanted to play sports which were fun but had "professional rules" for all to play by. ...read more.

The FA continues to work on promoting, developing and protecting the game at all levels. As the society became more and more enthusiastic about football and some teams had huge amounts of support from fans, the FA had to begin diverging from its priorities of making football fair for everyone, onto cracking down on hooliganism and more recently racism from the fans. These problems have been no going for some time but are being cracked down on by the FA in order to protect mainly international football, as the FA threatens to ban countries that are unable to control their fans from carrying out hooliganism or racism. Joe Birch ...read more.