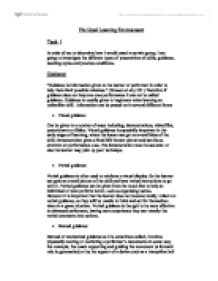 The Ideal Learning Environment Task 1 In order of me to determine how I would coach a certain group, I am going to investigate the different types of presentation of skills, guidance, teaching styles and practice conditions. Guidance "Guidance is information given to the learner or performer in order to help them limit possible mistakes." (Wesson et al p 531) Therefore if guidance does not improve ones performance it can not be called guidance. Guidance is usually given to beginners when learning an unfamiliar skill. Information can be passed on in several different forms * Visual guidance Can be given in a number of ways including; demonstrations, video/film, poster/charts or Slides. Visual guidance is especially important in the early stages of learning, where the leaner can get an overall idea of the skill. Demonstration gives a 'Real life' instant picture and can focus attention on performance cues. The demonstration must be accurate or else the learner may pick up poor technique. * Verbal guidance Verbal guidance is often used to reinforce a visual display. So the learner can gain an overall picture of the skill and have verbal instructions to go with it. Verbal guidance can be given from the touch line to help an individual or team perform better, such as organising tactics. ...read more.

* Distributed This practice is interspersed with breaks which can either be rest or another skill. These sessions are good for athletes with lower levels of fitness and experience. Listed below are different age, s*x and skill level groups, I am going to find the best learning environment for each. A) 7-11 years learning a new skill The skill these are learning is front crawl, Guidance- visual, verbal, manual A physical demonstration of the front-crawl action should be used to give the group an overall picture of what front crawl would look like. As well as pointing out key points to the stroke verbally. The use of kickboards and floats would aid the learner mechanically as well. Teaching style- Command Because the group are of a young age, they might lose concentration. Being quite firm would keep the children focused on the task. Also telling the children what to do and correcting them if they did it wrong would reduce the chance of them doing the skill wrong. Presentation of skills- Part practice Because front crawl would be quite complex for a young beginner, it would be best to teach the skill in parts. Breaking the different sub-routines up (arms stroke, legs kick, breathing) and practicing them separately would able the learner to acquire the skill easier. ...read more.

injured part A = Active movements from the player P = Passive movements by therapist S = Strength- Players movements are resisted by therapist www.thefa.com After I have followed this procedure, I will then take appropriate action. Either provide first aid on the field myself, or if necessary help as much as I can and get someone to phone an ambulance. B) To motivate a de-motivated student I would offer them rewards if they meet specific targets. Also I would give them lots of encouragement, lots of praise and hold back the negative feedback. I would make the session enjoyable rather than boring- involving lots of games. Another thing I could do is put the students into teams, and put the de-motivated student into a more talented team so they will feel success. C) If I was faced with a physically challenged student, I would treat them the same way as any student, but be sympathetic to their needs. I would try to involve them as part of the group as much as possible ensuring that the student is safe at all times. I would give the group appropriate activities which the physically challenged student could join in. For example if they where in a wheelchair I would not have the group playing football, I would play basketball or badminton- which they will be able to play. ...read more.