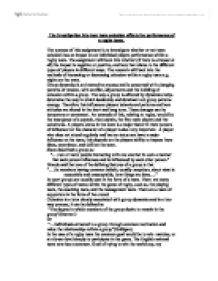 The investigation into how team cohesion affects the performance of a rugby team.

The investigation into how team cohesion affects the performance of a rugby team. The purpose of this assignment is to investigate whether or not team cohesion has an impact on an individual players performance within a rugby team. The assignment will look into whether (if there is a impact at all) the impact is negative or positive, and how that relates to the different types of players in different ways. The research will look into the methods of increasing or decreasing cohesion within a rugby team e.g. nights on the town. Group dynamics is an interactive process and is concerned with changing patterns of tension, with conflict, adjustments and the building of cohesion within a group. ...read more.

A player who does not attend regularly and has no status can have a major influence on the team, this depends on the players ability to impose there ideas, experience, and skill on the team. Shaw described a group as: "....two or more people interacting with one another in such a manner that each person influences and is influenced by each other person." Woods said that one of the defining features of a group is that "....Its members having common beliefs, usually unspoken, about what is acceptable and unacceptable, how things are done...." In sport groups are usually seen in the form of a team. There are many different types of teams within the game of rugby, such as, the playing team, the coaching team, and the management team. ...read more.

In the case of a rugby team the common goal would be to win matches, or at a lower level simply to participate in the game. The English national team now has a common. Goal of trying to win the world cup, my research would indicate that the national team is very cohesive and do value the relationships within the group. There success in recent years would be proof of this, as a very high cohesion relates to successful results. "One is always hearing about how important it is for a team to gel, bond or have good chemistry. Cohesive teams can achieve dramatic and awesome things. The way players interact has a tremendous impact on the way a team performs."(Internet 1) How well England do in the world cup will be a good indication to whether success is related to cohesion. ...read more.