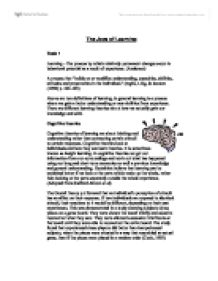 The Joys of Learning

The Joys of Learning Task 1 Learning - The process by which relatively permanent changes occur in behavioral potential as a result of experience. (Anderson) A process that "builds on or modifies understanding, capacities, abilities, attitudes and propensities in the individual." (Inglis, Ling, & Joosten (1999) p. 104-105) Above are two definitions of learning, in general learning is a process where we gain a better understanding or new abilities from experience. There are different learning theories about how we actually gain our knowledge and skill. Cognitive theories Cognitive theories of learning are about thinking and understanding rather than connecting certain stimuli to certain responses. Cognitive theories look at individuals and how they can learn theories. It is sometimes known as insight learning. In cognitive theories we get our information from our surroundings and work out what has happened using our long and short-term memories as well a previous knowledge and general understanding. Gestaltists believe that learning can be explained better if we look at the parts which make up the whole, rather than looking at the parts separately outside the whole experience. (Adopted from Stafford-Brown et al) The Gestalt theory put forward that an individual's perception of stimuli has an affect on their response. If two individuals are exposed to identical stimuli, their reactions to it would be different, depending on their past experiences. ...read more.

Closed-Loop theory (http://www.longroad.ac.uk/accreditation/subject_physical_education/acquisition_skill/motor_control/loop_theory.htm) The closed loop theory is different, as feedback is available. Closed loop theory is used in sport as when mistakes are made; we can provide feedback on how we made the mistake. Feedback is essential to the learning process; we get the feedback either intrinsically or extrinsically. An example of when we might use feedback during the skill could be a forward role in gymnastics, while the performer is performing the role they will have intrinsic feedback, and they can adjust their position to correct it. Task 3 Fitts and Posner (1967) are two American psychologists who set out the changes and phases that learners pass thought in order to acquire a skill. They proposed that there are three stages to learning a new skill. (Adopted from Stafford-Brown et al p132) 1. Cognitive 2. Associative 3. Autonomous The cognitive stage The Cognitive stage is the understanding of what to do and how they do it. This process relies on mental and cognitive processes. When learning a skill, there are several routines that they will follow in order to grasp the skill to move on the associative stage. A sporting example would be a tennis serve, the person learning would: 1. Position the feet correctly 2. ...read more.

Badminton and tennis- Negative transfer occurs between these two sports of how the shot is played. In badminton the shot is a fairly fine skill, involving a flick of the wrist. Whereas in tennis it is a gross movement using the forearm. Indoor football and outdoor football- Positive transfer occurs between these two activities because they are generally the same game but played in a different environment. The same skills are used so we also see skill to skill transfer. Rugby and basketball- These two sports have zero transfer as the skills from one sport cannot help or effect a skill in the other. But Positive transfer can occur in these two sports are they both involve similar aspects, such as creating space. Also negative transfer could occur as rugby is a contact sport and basketball is non-contact, also the ball can not be passed forward in rugby. But proper explanation of the rules should avoid this. Horse riding are hockey- zero transfer occurs between these two sorts as they have nothing in common. Trampolining are high board diving- Positive transfer will occur between these two sports as they both involve acrobatics. All the skills needed to twist and turn can be positively transfer to one another. BIBIOGRAPHY Wesson, k. Wiggins, N. Thompson, G. Hartigan, S. Sport and PE 2000 hodder and stoughton Stafford-Brown, J. Rea, S. Chance, J. sport and exercise science 2003 hodder and stoughton www.longroad.ac.uk ...read more.