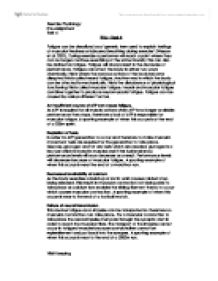 The Mechanisms of fatigue, including neuromuscular fatigue and list the effects of metabolites (lactate/carbon dioxide)

IVA - Task 4 Fatigue can be described as a 'generic term used to explain feelings of muscular tiredness or laboured breathing during exercise' (Wesson et al, 2001). During exercise a performer will reach a point where they can no longer continue exercising at the same intensity this can also be defined as fatigue. Fatigue will always result in the decrease of performance. Fatigue can effect the body in either two ways; chemically, this is where the nervous actions of the body become disrupted this is called neural fatigue. Another way in which the body can be affected is mechanically, this is the disturbance of physiological functioning this is called muscular fatigue. Neural and muscular fatigue combine together to produce neuromuscular fatigue. Fatigue can be caused by various different factors. An insufficient source of ATP can cause fatigue. As ATP is required for all muscle actions when ATP is no longer available performance then stops, therefore a lack of ATP is responsible for muscular fatigue. A sporting example of when this occurs is at the end of a 200m sprint. Depletion of fuels. In order for ATP generation to occur and therefore to make muscular movement fuels are required for the generation to take place. Glucose, glycogen and fat are fuels which are needed, glycogen is a key fuel which is stored in muscles and if this fuel level is low, performance levels will soon decrease as a result. ...read more.

This results in the restriction of fuels working effectively and enzyme activity and therefore causes muscular fatigue. The other bi product which is produced all the time through the aerobic system is carbon dioxide. Whilst the body is resting carbon dioxide is usually removed by the breathing mechanics but as the body is exercising a higher level of carbon dioxide is taken in. Chemo receptors detect these higher levels of carbon dioxide and in response the body's breathing rate increases in order to clear the carbon dioxide. When carbon dioxide accumulates in the body it gets converted in carbonic acid which has a similar affect as lactic acid, the higher acidity levels restricts muscle action and therefore causes fatigue. A sporting example of when this occurs is after lots of repeated sprints. Figure 1 (http://www.turfclub.com.sg/web/tchappening.nsf/0/1c8754ed4275486948256c7e00296618/$FILE/Allan%20Davie%20Seminar%20Notes.doc) As the body exercises intensely blood lactate levels increase and the lactate begins to accumulate in the blood. This is known as the onset of blood lactate accumulation (OBLA). OBLA is the point at which lactic acid accumulates in the muscles. 'OBLA is known as the anaerobic threshold and is considered to be somewhere between 85% and 90% of your maximum heart rate'. OBLA is shown in figure 1. (Stafford Brown et al 2001). As the athlete begins to exercise and therefore become fitter it affects the onset of blood lactate accumulation. ...read more.

These recovery processes can be helped by an active warm down by doing low intensity exercise as this buffers acid in the muscles and quickens up the removal of lactate and reduces soreness and the chance of delayed muscle soreness. To recover quicker from using the lactic acid or anaerobic systems the athlete needs to increase their heart rate, as done so in an active warm up. This will then also increase blood flow, this will result in the reduction of lactic acid and carbon dioxide levels and this will also increase oxygen levels. Below is a table which shows sporting examples to show how recovery is different for different energy systems. Sport Energy System Recovery 100m ATP-PC In order for an athlete to recover from 100m the alactic recovery system is used. ADP is converted into PC and ATP through the aerobic system. ATP must be replaced. PCr stores must be replenished and lactic acid build up within the muscles must be removed. This is achieved by oxygen being put back into the muscles so buffering can occur and glycogen being restored. 5000 meters Aerobic System After the body has worked aerobically in order for the body to recover myoglobin and haemoglobin stores must be replenished. This occurs by oxygen being put back into the body. The oxygen being put back into the muscles allows buffering to occur and glycogen being restored. (Table 2) ?? ?? ?? ?? Exercise Physiology IVA Assignment Task 4 Vikki Keeping Exercise Physiology IVA Assignment Task 4 Vikki Keeping ...read more.