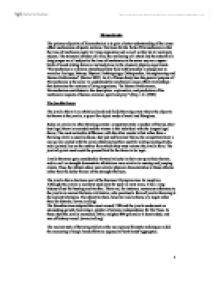 The primary objective of Biomechanics.

Biomechanics The primary objective of Biomechanics is to gain a better understanding of the cause-effect mechanisms of sports motions. The basis for the field of Biomechanics is that the laws of mechanics apply to living organisms just as well as they do to inanimate objects. The structural stresses of a tree, the swimming of a shark and the takeoff of a long jumper are all subject to the laws of mechanics in the same way as a square block of wood sliding down an inclined plane in the classical physics experiment. "Biomechanics is a diverse interdisciplinary field with branches in disciplines as varied as Zoology, Botany, Physical Anthropology, Orthopaedics, Bioengineering and Human Performance" (Bevan 2001). In all of these disciplines the general purpose of Biomechanics is the same: to understand the mechanical cause-effect relationships that determine the motions of living organisms. "In Human Performance, Biomechanics contributes to the description, explanation, and prediction of the mechanical aspects of human exercise, sport and play." (Hay, J.C. (1993) The javelin throw The javelin throw is an athletics (track and field) throwing event where the object to be thrown is the javelin, a spear-like object made of metal and fibreglass. Rules are similar to other throwing events: competitors take a number of throws, their best legal throw is recorded and the winner is the individual with the longest legal throw. ...read more.

(www.iaaf.org) Task 3 Method A subject was chosen to analyse (subject 1) they had the following charactersistics; Height 178 cm Weight 77kg Subject 1 had no previous knowledge or experience of the javelin event, although sporting experience on the whole is quite large. Subject 1 has a sporting history of mainly team sports or ball sports, skills that involve projectiles, in some ways similar to the javelin in that some abilities are the same (hand eye co-ordination, flexibilty etc.) but vastly different in others. The projectile in javelin is obviosly launched with the hand, the experience of subject 1 doesn't cover projectile launching with the hand, rather than with the foot. The technique of the javelin throw of subject 1 was recorded for analysis using a Minolta Z1 dimage digital camera at 640x320 resolution and 30 frames per second. In the context of sport and exercise, biomechanics is the science underlying techniques. Good technique is characterised not only by effective performance, but also by reduced risk of injury. There are basically two ways of analysing techniques: qualitative and quantitative. A qualitative analysis is based on observation (directly and/or via film or videotape) and results in a more-or-less personal evaluation. ...read more.

3. Hip drill. Exaggerate your throwing position without an implement. Bend right leg way down, keeping both feet on the ground. Come up and drive the hips forward at the same time. "SNAP". Get the hips to come forward quickly. Drop back again and repeat. This will improve muscle memory of mechanical stages 7-9 4. Exercises with a javelin: � Pulls with a partner holding the tail end in different position of the throwing motion. � Place the javelin tip against a wall and the arm is forced back, getting into the delayed arm position. � Throwing into a hillside. � Stretching exercises. � Lighter implement for arm speed. The above drills and exercises focus on technique purely, with the emphasis on the positioning of the javelin, and getting comfortable with it, primarily focusing on the opening mechanical stages (1-3) 5. Bounding drills. There are many variations incorporating both the single and double leg responses. Since the run-up is the driving emphasis behind the throw the bounding exercises will focus on the technique of the opening mechanical stages once more (1-3). 6. Wall pulley. Use the regular handle or make a grip from a broom handle, and situate the pulley such that it operates at 30 degrees to simulate the throw. This drill focuses on the release action of the final mechanical stages (8-10), the 'snap' against the wall pulley mimicking the release technique, again improving muscle memory. ...read more.