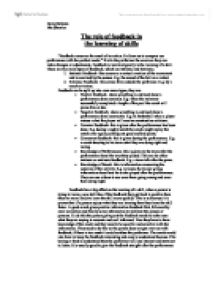 The role of feedback in the learning of skills

The role of feedback in the learning of skills "Feedback occurs as the result of an action. It allows us to compare our performance with the perfect model." It tells the performer the errors so they can make changes or adjustments. Feedback is involved greatly in the learning of a skill. There are two main types of feedback, which are Intrinsic and Extrinsic. 1. Intrinsic Feedback- this occurs as a natural reaction of the movement and is received by the senses. E.g. the sound of the ball on a racket. 2. Extrinsic Feedback- this comes from outside the performer. E.g. by a coach or trainer. Feedback can be split up into even more types, they are: * Positive feedback- when something is outlined about a performance done correctly. E.g. when the swimmer successfully completed a length of the pool the coach will praise him or she. * Negative feedback- when something is outlined about a performance done incorrectly. E.g. In Basketball when a player misses a shot the player will receive constructive criticism. * Terminal feedback- this is given after the performance has been done. ...read more.

It is usually good to give the feedback straight after the performance so the person knows what the coach is talking about, the player can forget what he/she did and become de-motivated if he/she is being criticised for no reason from the point of view of the performer. The coaches are advised to encourage intrinsic feedback because if the player is confident then they would be comfortable and relaxed, this makes a player perform to the best of their ability. A skill is something you are born with and can be improved over time and practice. There are four different types of skill, they are: Cognitive skills This type of skill involves the person to have to process thoughts to be able to do it well. E.g. judges adding up scores in ice-skating. Perceptual skills This type of skill involves the person to interpret the information in his or her own way. Motor skills This type of skill involves the muscular system and concerns movement and muscular control. E.g. walking and running. Perceptual motor skills This is an extremely complex process; it does not just involve one type of skill. ...read more.

I also think that if someone else says you have done well (extrinsic feedback) it make me more confident. If you think you've done well and know one says anything you have some doubt about weather it was good, but if someone does say something then it helps you know it was good. Another way of getting positive feedback is to make yourself fitter and if people say you look good then you feel good about yourself and you are more positive in your play. On the other hand if all the feedback you get is positive then you can get complacent and this can also make you play bad because you try taking it past players or shooting instead of passing to other player because you think your better than them. This makes other players begin not to pass the ball to this player because if the person does not pass to you why should the other person expect to be passed to. A good way of receiving feedback is off a friend or a teammate because you are more likely to listen to a friend rather than a stranger or a person you don't like very much. David Roberts Mrs Showler ...read more.