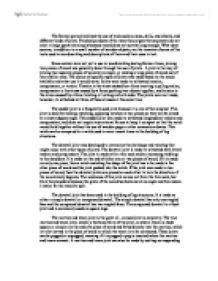 The Roman period involved the use of tools such as saws, drills, and chisels, and different kinds of joints. Finished products of the many hours spent by carpenters do not exist in large quantities simply because wood does not survive long enough. What does survive, in addition to a small number of wooden objects, are the remains of some of the tools used in woodworking and descriptions of them and their uses in text. Since screws were not yet in use in woodworking during Roman times, joining two pieces of wood was generally done through the use of joints. A joint is the way of joining two separate pieces of wood at an angle, or making a long piece of wood out of two smaller ones. The choice of specific types of joints was made based on the wood available and what use it would serve. Joints were made to withstand tension, compression, or torsion. Tension is the stress caused by a force exerting a pulling action, compression is the stress caused by a force pushing two objects together, and torsion is the stress caused by a force twisting or turning on both sides. The joints were not made, however, to withstand all three of these stresses at the same time. ...read more.

Most woodworking tools consist mainly of a blade with one or more cutting edges and a block or handle with which the tool can be guided. The axe, adze, saw, bow drill, and chisel all consist of these main components. The evidence for the tools of the Roman period discussed below are the actual tools that have survived and depictions found showing the tools in the ways that they were used. The axe was the first, the simplest, and for a long time the most common cutting tool. The axe is a heavy wedged - shaped forged piece of metal with a shaft hole. The shaft hole is the hole where the wooden shaft, or handle, was inserted. The head of an axe was on an average around six and one half inches long and three inches wide at the cutting edge. The shaft hole was usually around two and one fourth inches long and two inches wide. The general purpose Roman axe had a flat butt and slightly curved blade and was fitted with a straight wooden handle. The Romans also made an axe with the same blade features but with lugs above and below the shaft hole to make the handle fixture sturdier. ...read more.

The Romans were the first to use a curved stick for the bow(Goodman 161). This curved stick had the cord of the bow attached to it and the cord was wound around a spindle that turned the drill bit as the worker moved the bow back and forth(Adam 99). The drill bit is made of iron, with a square middle section, a long tapered pin at the top and a spoon bit at the bottom that performed the actual boring(Goodman 162). Chisels For work that had to be done more accurately and neatly, a variety of chisels could be used along with a mallet. The length of a chisel was usually around sixty millimeters long with a blade around thirty seven to sixty nine millimeters wide. The chisels sometimes had a wooden handle. The metal could have been forged to create an ample surface for striking the chisel(Goodman 196). The mallet would be held in one hand with the chisel touching the wood in the other. As the chisel is struck by the mallet, the wood is removed. The tools of the Roman period were fairly advanced and efficient. They do not differ greatly from comparable modern tools. The Romans appear to have been good woodworkers, but only a limited amount of their handy work and tools survive. This has led to limited, but clear information on this subject. ...read more.